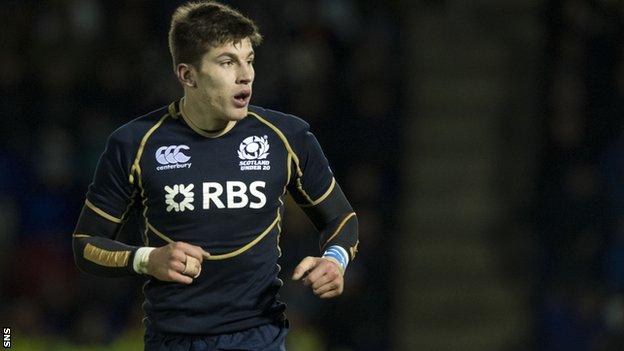 Scotland have not ruled out capping Tommaso Allan, despite the 20-year-old being called up by Italy.

The Perpignan fly-half has represented Scotland at U17, U18 and U20 levels but is in the Azzurri training squad for the November Test series.

"We are seeking clarification on his future," a Scottish Rugby spokesman told BBC Scotland.

"We have been monitoring Tommy Allan's progress for some time now and we will continue to do so."

Allan, who can also operate at centre, was born in Vicenza to an Italian mother, Paola Berlato, when his Scottish father William was playing rugby in Italy.

Peter Wright coached Allan for Scotland at the Under-20 World Cup and thinks the player has potential.

"He's got undoubted promise but I'm not sure if he is ready for international rugby just yet," he said.

"He's playing in a position that Scotland don't have a lot of depth in and he's got ability given that he's playing for Perpignan."

Allan is the nephew of former Scotland hooker John Allan, who earned nine Scotland caps as well as appearing on 13 occasions for South Africa.

"I'm a proud uncle but also slightly confused," he told BBC Scotland. "Things have happened quickly for my nephew.

"I was always pushing Tommaso, or Tommy as I call him, to play for Scotland. But I think he'll go for whoever gets in first.

"The only problem I have is why did Scotland let this opportunity slip through their hands?

"He has done extremely well at Perpignan, learning under the Welsh fly-half James Hook and sometimes getting into the first team ahead of him."

Italy play November Tests against Australia, Fiji and Argentina, with head coach Jacques Brunel calling up two other uncapped players in Ruggero Trevisan and Michele Campagnaro for the training camps to be held at the end of the month.

Brunel will name his final 30-man squad on 3 November.

Allan was linked with a move to Edinburgh when playing out of Western Province in South Africa before joining Perpignan.