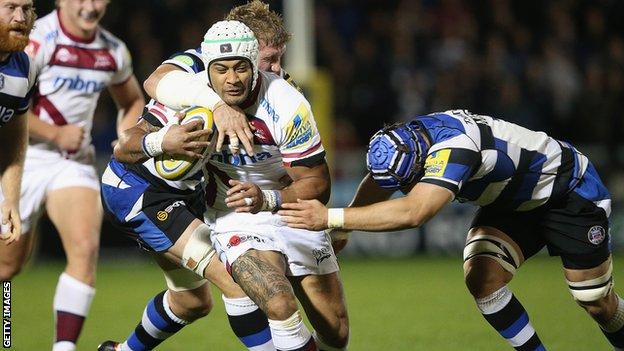 Centre Sam Tuitupou says Sale's good start to the Premiership season has raised hopes that they can finish in the top half of the table in May.

The Sharks but are fifth this term after three wins from five games.

"If we can win our home games and pick up a few away wins, we can push for that top six," said Tuitupou, 31.

"We had one hiccup against Newcastle, but it's those games that you learn from and try and improve on."

Sale narrowly lost their opening home game to the newly-promoted Falcons and were also beaten at much-fancied Northampton.

But victories against Gloucester, London Wasps and Bath - all sides expected to be in the upper echelons of the Premiership this season - have put Steve Diamond's side within one point of a spot in the top four.

The highlight of their at the AJ Bell Stadium last Friday was a superb defensive effort in the second period, especially for the 10 minutes while Sale were reduced to 14 men after lock Michael Paterson was sin-binned.

Mike Forshaw, a former Great Britain rugby league international, was brought in as a defensive coach during the summer and ex-Sale skipper Tuitupou says he has made a big impact.

"If we're not winning the tackle, we're there to slow the ball down," said the New Zealand international, who returned from a jaw injury to make his first appearance of the season against Bath.

"It makes it a lot easier for our defence to set up for the next phase and get the line speed up. It's been a big plus and hopefully we can carry on the way we've been going."

The Sharks begin their European campaign on Thursday with a home fixture against French club Biarritz in the Challenge Cup, with Tuitupou named in the starting line-up.