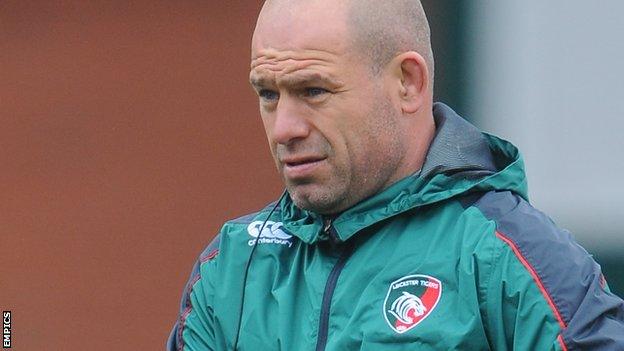 Director of rugby Richard Cockerill says he turned down other clubs before signing a new five-year contract with Leicester Tigers.

Cockerill, 42, was strongly linked with a move to France with Clermont Auvergne reportedly keen for him to replace Vern Cotter, who is becoming Scotland coach at the end of the season.

He told BBC Radio Leicester: "There has been interest from other places.

"But for me it's about security for myself and my family."

He added: "I talk about loyalty the whole time to players and other coaches and staff here. It's all right for me to preach that but it's important that I practice that as well.

A Tiger for 18 years

Cockerill left Welford Road to play in France in 2002 but returned as an academy coach in 2005.

He has been in charge since 2009 following two separate spells as acting head coach and has led Tigers to three Premiership titles, five Premiership finals and a Heineken Cup final.

"It's not always about finances. It's about where you are happy, it's about what you are as a person and all those things and the emotional attachment to what you do."

Cockerill spent 10 years with the club as a player from 1992 and, after a spell in France, returned as an academy coach in 2005.

He has been in charge since 2009 following two separate spells as acting head coach and has led Tigers to three Premiership titles, five Premiership finals and a Heineken Cup final.

Cockerill only signed a three-year contract last summer but is thrilled to be extending his stay.

"The club have been very supportive," he said. "They were comfortable with what I was doing and I am happy to stay.

"My record speaks for itself. I care about what I do. I get paid to do a job but it's something I would do anyway.

"I am grateful for their support. That stability is great because it keeps everybody on an even keel.

"I think I have proved I am the right person. I came through as a player and started as an academy coach and I have ended up as director of rugby.

"But I have had to prove myself on the way. It's been a great eight or nine years and hopefully that will continue for another five."