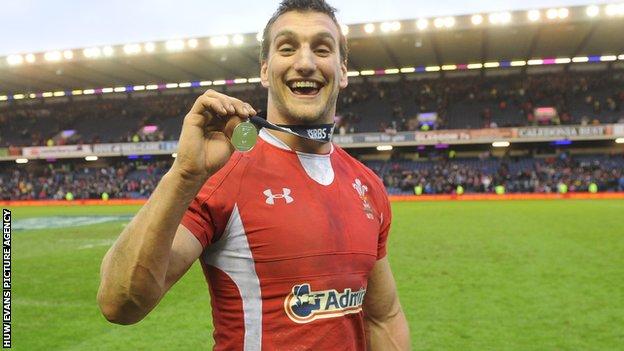 Sam Warburton says he would like his new Cardiff Blues contract sorted out before Christmas.

The Wales and British and Irish Lions flanker is out of contract at the end of this season.

But Warburton, who is one of six Welsh Lions whose current deal expires in the summer, is ready to buck the trend and not sign for a French or English club.

"For me, right now, my preferred option would be to stay at home," said Warburton, the 2013 Lions captain.

"I have let them know I would like to stay.

"Now I cannot influence what happens. There are meetings that now go on behind closed doors and I am hoping they are trying to sort something out.

"I am waiting to hear now and hoping it can be sorted out this side of Christmas."

Warburton, 24, Blues team-mate Leigh Halfpenny, Scarlets' Jonathan Davies, and the Ospreys trio of Alun Wyn Jones, Adam Jones and Ian Evans could all be big-money targets for clubs outside Wales.

But Warburton is the first to commit his future to Wales, as long as a new deal can be agreed.

Warburton's agent Derwyn Jones, the former Wales lock, has already said the Blues have not been able to make a new contract offer as their budget is uncertain because of the row engulfing European rugby.

English and French clubs have put in place plans to quit the Heineken Cup next year and have proposed the rival Rugby Champions Cup.

The Aviva Premiership and French Top 14 clubs believe the current European structure favours teams from the Pro12 - made up of sides from Wales, Scotland, Ireland and Italy - both in terms of qualification and in their share of revenue.

The Pro12 sides, or at least a reduced number, would be allowed to join the potential new tournament, but participation by teams could yet be vetoed by each nation's governing union and the International Rugby Board.

Welsh Lions out of contract in 2014

The financial planning in Wales is complicated further by a proposed extra pot of £1m on offer from the Welsh Rugby Union (WRU).

That sum has been earmarked for the four regions, but the Blues, Dragons, Ospreys and Scarlets do not yet know how the money will be shared and whether there will be any limit on what it can be spent on.

Warburton does admit he fears being left in limbo and wants to know whether the Blues or the WRU can afford to offer him a deal.

"My only concern as a player is that it gets dragged out so long and you end up with nothing on the table," said Warburton

"I haven't thought of a deadline yet but there will have to be a stage where there does become one.

"You cannot wait until the last day of the season because nobody will want you by then.

"It is a weird situation to be in and I have never been out of contract before because I have always ended up extending my contracts with the Blues."

Warburton has seen a host of his Wales and Lions teammates leave for England and France, with wing George North at Northampton Saints and centre Jamie Roberts and flanker Dan Lydiate at Racing Metro 92 in Paris, France.

Wales's Grand Slam-winning captain in 2012 says he does not blame players for leaving for Wales but he has decided to stay.

"I had a good chat with Dan for about an hour the other day and he is really enjoying it," said Warburton.

"I can see the positive of going there. Jamie is a free spirit anyway and, take the money out of it, he would have gone to experience Paris.

"Each individual is different and has a different thought process.

"Dan is developing his game as a flanker, his fiancee is a French teacher, so it makes sense for some people to go there. I don't blame them at all."