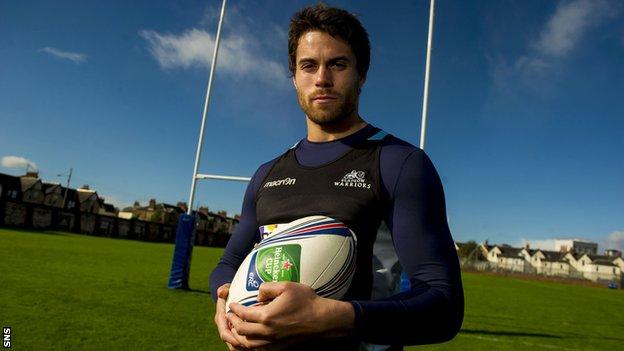 Winger Sean Maitland is determined to establish Glasgow as a side to be reckoned with in Europe.

"I suppose there is a pressure on us to justify our place in the competition, to show we deserve our place," he said.

"We have established ourselves in the Pro12 but we haven't done too much in the Heineken Cup.

"If you look at the likes of Leinster and Munster, to become a great team, you have to make that next step into the top level of European rugby."

The Heineken Cup opens this weekend against a backdrop of uncertainty, with French and English clubs intending to form a new tournament next season.

Those behind the proposed breakaway are unhappy with a number of issues, including the automatic slots handed to both Scottish clubs and the fact Pro12 teams can rest players ahead of European games, without any fear of relegation.

Glasgow lead the way in the Pro12 with five consecutive wins but their record in Europe is not good.

And Gregor Townsend's men face a daunting task away to Heineken Cup holders Toulon on Sunday.

Warriors won just one of their six pool games last year and have not escaped the group stages since 1997-98, when they qualified for the now-defunct quarter-final play-offs.

In total, they have won just 26 games from 85 played in the competition stretching back 17 years. Now Maitland says that must improve.

"Edinburgh have done well but not Glasgow, so that is something we are definitely looking to do," said the British & Irish Lion.

"But we have got a pretty good pool and think we can get to that next step."

Toulon - skippered by 2003 England World Cup winner Jonny Wilkinson - are unbeaten in their last 10 games at the Stade Mayol and have won their previous 16 home games in Europe.

"The statistics don't lie," added the New Zealand-born back.

"Toulon are European champions for a reason. They haven't lost at home for a while either and we know we are going into the lions' den, a cauldron.

"But there is a lot of self-belief in our team too. We have won five from five in the Pro12 and those results don't lie either.

"We know we have the firepower to go down to Toulon and compete well.

"They haven't had their best performances in their last few games. They have got big names on paper but we definitely think we have got the team to beat them too."