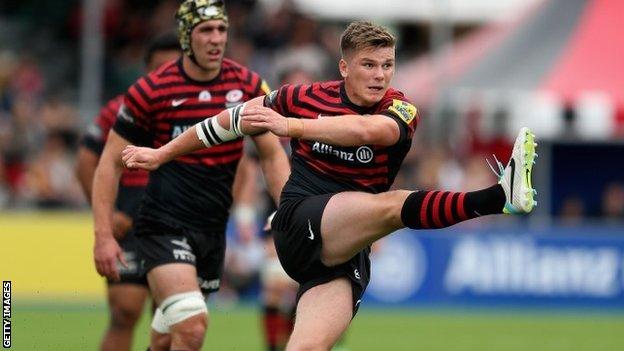 An early converted try from Chris Wyles put Saracens in front before Dan Parks kicked a penalty for the hosts.

Chris Ashton went over for the visitors to regain their advantage but Kieran Marmion's and Danie Poolman's converted tries either side of a Farrell penalty kept the underdogs in it at the break.

Farrell kicked two penalties to get the win despite a late push from the hosts.

Quarter-final and semi-final appearances in successive seasons have given Sarries a hunger to go all the way this year, but they came up against a gutsy home side at the Sportsground on the opening weekend.

It looked like it would be easy when Wyles went over in the sixth minute following some smart link-up play between Farrell and David Strettle straight from a line-out.

Farrell converted before a Parks penalty, and he did so again when Ashton touched down in the corner in the eighth minute as the visitors exerted early dominance.

But the Irish side responded with the help of a number of missed tackles from Saracens, Marmion cutting through from the left for an opportunist 18th-minute try with Parks tapping over the simple conversion.

After Farrell kicked a penalty for Saracens, a spell of patient build-up play from Connacht was rewarded in the 32nd minute when South African Poolman stepped inside two defenders to score before Parkes converted to leave it level at half-time.

Farrell kicked his second penalty 12 minutes after the break and despite the hosts' gritty defence continuing to frustrate Sarries, he added another with six minutes to go following a Steve Borthwick-led maul.

Connacht almost got something from the game at the death when they piled bodies towards Saracens' line, but replacements Aly Muldowney and Paul O'Donohoe were held up short.

"There were big calls at crucial times but I am so proud of my team, particularly up front where the boys were massive.

"That's what I struggle with, it really hurts me because I feel for our team. Those guys have given everything and they deserve better."

"It's an important four points. It was a tough and physical game so I am just happy to come here and take the points.

"Fair play to Connacht, they kicked just about everything and found space in our back field and put us under real pressure when they got their tries and got a real energy from that."