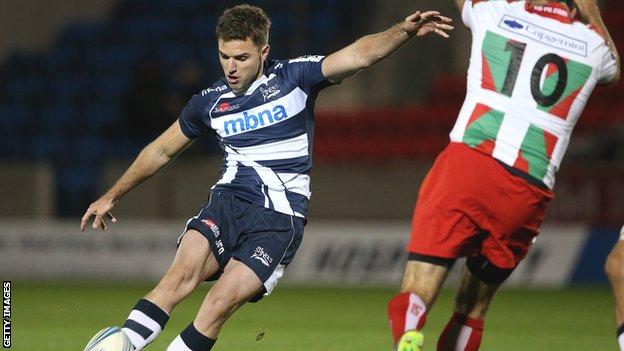 Joe Ford scored 16 points on his debut as Sale eased to victory over French side Biarritz in the Challenge Cup.

Two Ford penalties and a drop goal put the hosts ahead and he added the extras following a first-half penalty try.

Eugene van Staden closed the gap with a driving try, before a second penalty try wrapped the game up for Sale.

The home side went into the game having never beaten Biarritz in three previous meetings, all coming in the Heineken Cup.

Ford's 38-metre kick put the hosts in front but it was quickly replied to by Julien Peyrelongue, who edged his effort inside the left-hand post.

A smart drop goal from Ford put Sale 6-3 ahead and he added a 42-metre penalty soon after.

The youngster thought he scored the game's opening try but was denied by the television match official, although the hosts' pressure quickly told in the next play as they were awarded a penalty try, with Ford kicking the conversion.

Sale went to the break with a 13-point advantage and it took only six minutes of the second half for Ford to add to his tally with another penalty.

A giveaway by Biarritz saw Ostrikov race through for a try, which Ford converted to maintain his 100% record.

Biarritz, who had previously not lost a Challenge Cup tie in the UK since 1999, gave themselves hope of a fightback when they worked a play well from a line-out, which saw Van Staden drive over and Peyrelongue convert.

Ford left the field to a standing ovation to be replaced by Danny Cipriani, who was quickly into the action to create two tryscoring opportunities.

Sale went up a gear when Biarritz were reduced to 14 men as Francisco Gomez Kodela saw yellow at the scrum and, with the penalty about to expire, the Sharks grabbed a second penalty try and Cipriani kicked the extras.

The hosts went in search of a fourth try and subsequent bonus point but some late pressure went unrewarded.