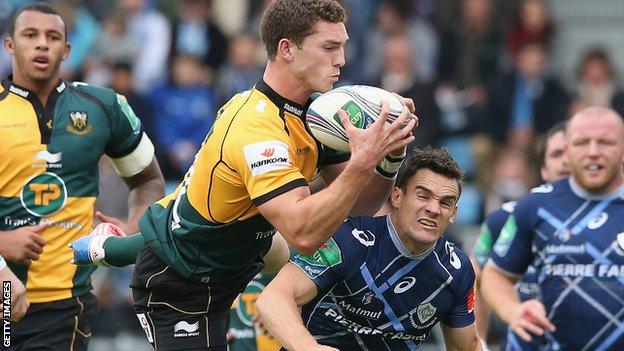 Northampton's hopes of emerging from one of the toughest Heineken Cup pools suffered an immediate blow with defeat by Castres at Stade Pierre-Antoine.

Stephen Myler replied with a penalty but Castres scrum-half Rory Kockott landed two either side of half-time.

Dylan Hartley's smart finish got Saints back to 13-10 but Kockott's third and fourth penalties saw the hosts prevail.

Myler's second penalty with 11 minutes left had cut the gap to three points for a second time, but the English side were forced to settle for a losing bonus point.

The two-time finalists must now beat Ospreys at home next Sunday, 20 October, to maintain hopes of qualifying from a group that also includes three-time champions Leinster.

This was the seventh pool meeting between the sides in four seasons. Saints have won all three at home and one away, and now lost three times at Castres. They meet again in Northampton in the last round of pool fixtures in January

Drawn in the same pool as Castres for a fourth year in a row, Saints - despite a strong start to the domestic season - were well aware of the task facing them in France, having lost at the Stade Pierre-Antoine 21-16 in October 2012 and 41-22 in December 2011.

Despite conceding an interception try after 10 minutes, they dominated possession in the opening quarter and Courtney Lawes stole two Castres line-outs.

But Saints were unable to breach an aggressive home defence, Myler's penalty on the half-hour their only score.

Full-back Ben Foden was sent to the sin-bin for killing the ball, and South African Kockott landed penalties in the 37th and 42nd minutes.

Saints showed resilience on the resumption, Hartley profiting from a fumbled Castres line-out to stretch out and score, Myler's conversion making it 13-10.

But Kockott immediately punished a Christian Day infringement at the breakdown, and restored the six-point gap with eight minutes left after Myler's second penalty.

Saints threw everything into snatching a winning try, but came up short despite sustained pressure deep into Castres territory.

"We came with the intention to play some rugby, which backfired against us a little bit in the first minutes with that interception.

"When you combine that with hard decisions from the referee, it gets frustrating.

"Our set piece was solid today, our scrum in particular did well against a massive pack. Our defence is looking good, and generally our game is in good shape."