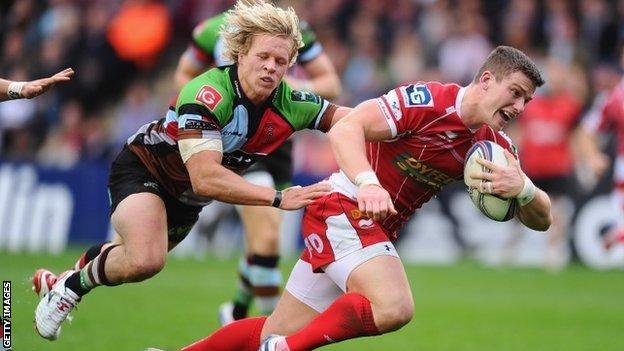 The Welsh side scored the first 13 points through Rhys Priestland's boot and Rhodri Williams' team score.

Quins' Mike Brown went over with 12 minutes left to close the gap to seven, but the visitors, down to 14, held on.

"It shouldn't have been so close at the end, but that was down to Quins not giving up. But for large parts of the game they were very ineffectual at best.

"Scarlets fully deserved the win and there scored two tries that were worth the admission alone.

"But Quins' season goes from not very good to a bit worse."

With last year's runners-up Clermont Auvergne and big-spending Racing Metro making up the rest of Pool Four, the result is an immediate boost to Scarlets' chances of making the knockout stages, with Quins' hopes already badly dented.

This was a third home defeat of the season and a third straight loss in a stuttering start, and they were immediately put under pressure.

The visitors' streetwise tactics of using Priestland's booming kicks to buy field position and then choosing their moment to run the ball paid dividends after just seven minutes when Rhodri Williams rounded off a fine try.

The scrum-half's score owed much to the good work of his half-back partner, with Priestland changing the point of attack after Liam Williams fielded a towering kick and then looping round to inject pace and give the scoring pass.

The Welsh side's fierce counter-rucking and deft offloading posed Harlequins problems both in and out of possession and Priestland added two penalties before the hosts finally got on the board with a kick from Nick Evans in the 20th minute.

The New Zealander's boot put Quins back to within three points when his perfectly weighted chip found a pocket of space behind Liam Williams and a cruel bounce gave Brown a free run under the posts.

Scarlets on the road

The Welsh region's win at the Stoop adds to their history of causing upsets in England. They beat the odds to edge out London Irish 27-25 in October 2009 and saw off Northampton 28-23 in November 2011.

But the half ended with Bread of Heaven (Cwm Rhondda) ringing around the stands as Scott Williams invoked memories of his match-winning try against England at neighbouring Twickenham en route to Wales' 2012 Grand Slam.

The centre hinted at a pass outside to midfield partner Jonathan Davies to burst through the initial defensive line, before a second dummy fixed Danny Care and allowed him to scamper over unchallenged.

Simon Easterby's men were slightly fortunate to be reduced to 14 men for only 10 minutes after prop Samson Lee scraped his studs across the face of Care in apparent pursuit of the ball shortly after the break.

Evans made immediate use of the numerical advantage by potting a drop-goal, but Priestland's two penalties, the second after a Quins pack shorn of summer departures James Johnston and Olly Kohn were sent backwards at the scrum, outweighed that effort during Lee's sin-bin period.

Quins slowly fought their way into the ascendancy and two more Evans penalties brought them to within seven points at 19-26 with less than 20 minutes left.

But Wales Under-20 international Jordan Williams relieved the pressure with a sensational stepping run that took him pinballing through a clutch of defenders to score when apparently pinned to the touchline.

It was a try that deserved to win the match and it proved decisive when Brown's dummy and dart for his second score, and Rob Evans' yellow card for persistent infringement, left the away side with some late pressure to withstand.

Veteran Paul Sackey had a try disallowed in the left corner for a foot in touch that would have left Evans with a kick for a draw, but Quins were instead left to rue their slow start.

Harlequins director of rugby Conor O'Shea: "I'm angry. I thought we were terrible.

"We made so many basic errors. I'm furious. We can talk about injuries and about various different things but I'm annoyed.

"When you have a bloke who dances along a touchline to score a try when he's easier to blow into touch, that shouldn't happen.

"There were some individuals out there who gave everything like Mike Brown, Nick Easter and Chris Robshaw, but it's not a game of touch. At times it looked like that with some of the tries they scored."