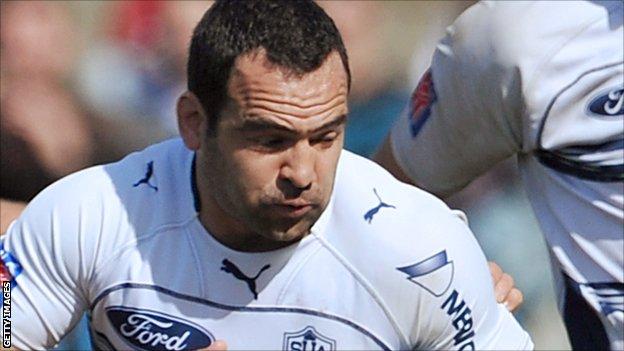 Worcester conceded a last-gasp penalty to miss out on a first win of the season in a 9-9 Challenge Cup draw at French side Oyonnax.

Fly-half Paul Warwick's three first-half penalties on his full debut earned a 9-6 lead but the decision to kick a late penalty for touch proved costly.

Warriors quickly gave away a penalty in their own 22 and Oyonnax profited.

Conrad Barnard, who had missed an earlier effort, added to two on-target kicks by slotting a third penalty.

The French Top14 side were dominant in wet conditions in the second half, but Worcester's defence proved crucial to earning them a share of the points.

Worcester are back in Challenge Cup action at Sixways this Saturday (19 October, 15:00 BST) when they host fellow Premiership side Sale.

"We got so close to coming away with a really difficult French win. Don't forget, this Oyonnax side have only lost once here. They've beaten Clermont, Toulon and Castres.

"And for us to be coming here not in the best of form and still trying to find ourselves and yet still get a result I thought showed a huge amount of character.

"The penalty in the last minute was frustrating. We had an opportunity to kick. But the guys on the field felt that, if they came back into our half, they were vulnerable to that drive which was growing in momentum and they felt they could control the game up there. It's just one of those decisions you've got to to move on from and learn from."