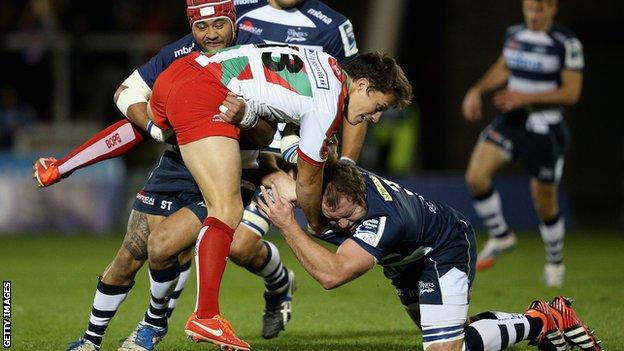 The Sharks pack were dominant against the struggling French outfit, with two of their three scores penalty tries.

"It's been a long time since we've put a pack to the sword like that," Diamond told BBC Radio Manchester.

"We wanted to up our defence. It was outstanding and I think Biarritz will be sore for a week after that game."

Second-rower Andrei Ostrikov also went over as Sale registered a

Summer signing Joe Ford, who was making his first start for the Sharks at fly-half, kicked 16 points and his performance has given Diamond a selection dilemma ahead of Sale's Challenge Cup trip to Worcester on 19 October.

in recent Premiership matches, but Diamond said Ford's display was just as assured.

"He [Ford] got a big knock on his head early doors, but he kicked impeccably and his field-position kicking was good," added the 45-year-old.

"If people come off the bench, get selected and play like they do, it makes it difficult for us. But that's what you want to have - a situation where you don't know what your first team is."