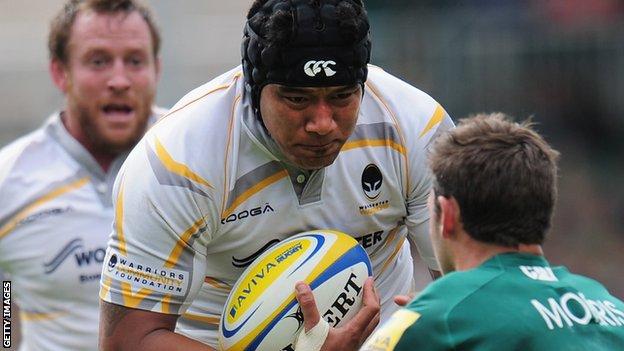 Worcester Warriors forward Semisi Taulava is facing two months on the sidelines with a knee injury.

"Rav has not broken anything, but he has damaged his ankle joint and will be out for a few weeks," said Warriors director of rugby Dean Ryan.

"We've lost Semisi for a significant chunk of time. He will be out for a couple of months, I'd imagine."

Taulava went off just after half-time in Saturday's 16-11 home defeat by Newcastle, the Warriors' fifth straight reverse this season, while Fatiaki, who has started every game this season, went off after just 19 minutes.

We have a great group of people here, we have great coaches and the team spirit is still good

Worcester have an automatic replacement lined up for Fatiaki in Scotland international Alex Grove, who made his first appearance of the season from the bench on Saturday after missing the opening month of the campaign with a groin problem.

Another plus point for the Warriors is that their three Argentina internationals, Agustin Creevy, Leonardo Senatore and Mariano Galarza, have now arrived after representing their country in the southern hemisphere's Rugby Championship.

Senatore is currently serving a ban for biting, but will be free to play from the start of November, allowing former Wales international loose forward Jonathan Thomas, the Warriors captain, to switch to number eight in place of Taulava.

Thomas insists that all is right in the camp at Sixways, despite the Warriors' poor start.

"There was a lot of expectation going in, but we have a great group of people here, we have great coaches and the team spirit is still good."

He was sent off for receiving two yellow cards in Monday night's A League match against Leicester Tigers.