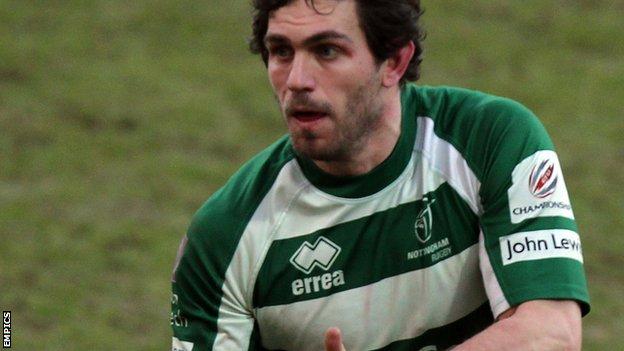 Nottingham backs coach Ben Johnston says last Sunday's struggle to field a side against Jersey was a one-off.

The Green and Whites suffered their third straight Championship defeat, losing 22-19 to the Channel Islanders.

They were hit hard by injuries and the loss of players recalled by parent club Leicester Tigers at short notice.

"It's not a long-term problem. A lot of it was down to injuries. We have a good relationship with Leicester," Johnston told BBC Radio Nottingham.

We can take a lot of positives out of the defeats in our last three games. We have played some good rugby.

"We were pretty lucky last season and didn't have a lot. Leicester needed their players around and we had a few places to fill."

Nottingham finished second in the Championship last season, but have suffered from budget cuts since then, meaning a big turnover of players.

Johnston insisted there was plenty of time to turn around current form and wants to see progress in Friday night's British and Irish Cup tie at Plymouth Albion.

He said: "We can take a lot of positives out of the defeats in our last three games. We have played some good rugby and it's just about putting it together for 80 minutes.

"If we can do that I think we should be good going up against most sides.

"For the new guys coming in, it's a learning process. It will take that little bit of time for them to get adjusted to each other."