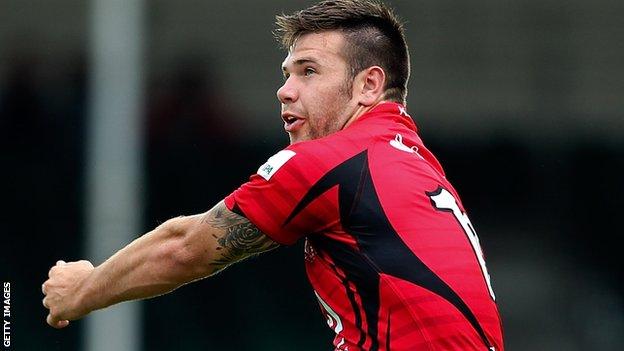 Jersey started their British and Irish Cup campaign with a 28-16 win over Ayr, who played large parts of the game with 13 men.

Tom Brown crashed over after a driving maul to put the islanders ahead.

But Ayr fly-half Finn Russell's try beneath the posts helped the visitors to a 10-7 half-time lead.

With the numerical advantage, Jersey fought back with Aaron Penberthy, Tom Fidler and James Copsey all crossing the line.

The visitors were not helped by their own ill discipline, with forwards George Hunter and Scott Sutherland both handed yellow cards and Andrew Dunlop sent off before half-time for a cuff.

Hunter was later shown a second yellow as Jersey were pressurising the try-line and the Scottish champions finished with 13 men.

"I thought Ayr did pretty well for 13 men, we made very hard work of that game," reflected Jersey boss Ben Harvey.

"The players recognise that and they're a bit down in the dumps, bits and pieces were very good.

"We asked the lads who haven't been playing in the league games to stand up and some of them did really well today.

"In patches I thought we looked in cruise control but the scoreboard didn't reflect that and we needed to be a bit tighter about how we finish things off."

The bonus-point win puts Jersey level with Cornish Pirates at the top of Pool Six with five points each from their opening game. Ulster Ravens and Ayr are both yet to get off the mark.

"I thought the boys played some decent rugby against a physical and intense Jersey side," Ayr coach Peter Laverie told BBC Radio Jersey.

"I think we played the more adventurous game but we came unstuck with the numbers.

"It's very difficult to play against a big team with 13 players and folk off the park, but they kept playing rugby and didn't give in and that's the kind of character you want in your team."