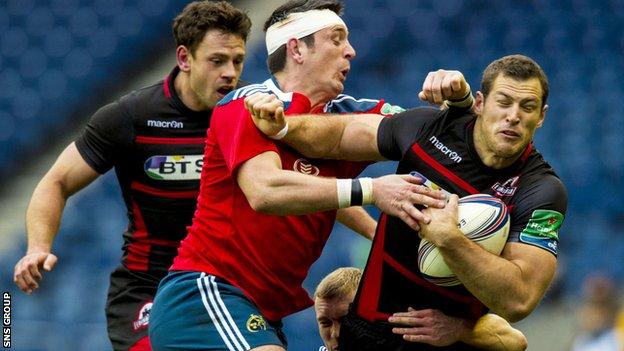 Matt Scott touched down early for the hosts, only for Casey Laulala and Mike Sherry to reply with tries.

Laidlaw's kicking nudged Edinburgh ahead at half-time but second-half pressure put Munster back in front.

Edinburgh did not win a game in the pool stage last year and are currently bottom of the Pro12 but they went toe-to-toe with the two-time European champions on what was a thrilling afternoon for the 7,024 crowd.

Scrum-half Laidlaw was the pick of the players on show and celebrated his 28th birthday with two conversions and five penalties - taking his club tally beyond 500 points.

But there was so much more to the home captain's game as he tackled with great ferocity and organised his team expertly during a second-half spell when Munster had a lot of the ball.

Edinburgh began with real bite and aggression and Scott, making his first competitive start of the season, broke through to score an early try, with Laidlaw's conversion creeping over via a post.

The hosts continued to make good ground and Laidlaw knocked over a simple penalty soon after.

Edinburgh played with real ambition. Their skill level was superior - they had more players who are comfortable on the ball.

Munster were wobbly at the set-piece all day - they didn't expect that kind of pressure from Edinburgh.

Ian Keatley reduced the deficit with a penalty following a great slaloming break from Keith Earls, and the Munster fly-half was soon knocking over a conversion after a rare slip from Laidlaw.

His kick from the back of a scrum was charged down by Donnacha Ryan and Laulala squeezed over the line, with Edinburgh exposed.

There was an immediate response from the home side as a penalty was earned from the restart and Laidlaw's kick again brushed the woodwork on its way through.

Edinburgh were then penalised at a scrum near their own posts and buckled under pressure from a quick tap-penalty as Sherry piled over, with Keatley adding the extras.

Visser and Dave Denton were held up on the charge as Edinburgh generated good ball speed before Laidlaw slotted two penalties to regain the lead.

And that advantage was protected in the final minutes of a high-tempo first half as Edinburgh survived drive after drive, with some impressive tackling.

The rate of scoring dipped after the interval but there was no let-up in bone-shuddering hits.

A few mistakes crept into Edinburgh's game and Munster rumbled forward ominously but the visitors were limited to two more penalties from Keatley.

Edinburgh had been pinned back in their own territory but suddenly discovered a second wind as Visser latched on to a looping pass from lock Grant Gilchrist to evade two flying tackles and score a terrific try.

There was a tense wait as the television match official reviewed Scott's collision with JJ Hanrahan and Gilchrist's pass but the home celebrations were allowed to continue.

Munster winger Simon Zebo was carried off injured before the visitors were penalised for offside from a scrum and Laidlaw again split the posts.

The Irish side could not find any fluency as they chased a converted try in the closing minutes, with Edinburgh defending like lions.

Laidlaw went close to extending his tally with a penalty from inside his own half. The man of the match found the woodwork for a third time but the ball bounced back out from the crossbar on this occasion.