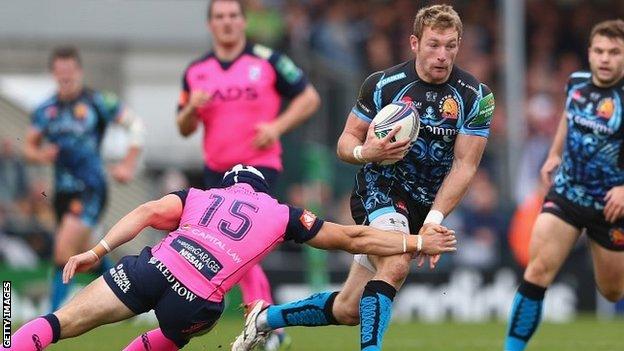 Exeter racked up six tries in a rampant opening Heineken Cup win over a fitful Cardiff Blues at Sandy Park.

The Chiefs had a bonus point inside half an hour as Tom Johnson, Dean Mumm, Matt Jess and Fetu'u Vainikolo scored.

A fifth try for Ben White made it 36-3 at half-time, but the Blues hit back on the resumption to claim a losing bonus point for scoring four of their own.

But a penalty from replacement Henry Slade five minutes from time saw Exeter - who were reduced to 13 men after two yellow cards inside a minute early in the final quarter - have the last word.

They will head to Glasgow next weekend in buoyant mood after their best European win to date, while the Blues must regroup swiftly for the visit of defending champions Toulon after an embarrassingly one-sided first half on Sunday.

In a debut campaign last season that included two narrow losses to three-time champions Leinster and home-and-away wins over the Scarlets, the Chiefs showed a relish to broaden their horizons.

Their early ambition - attacking from deep with ball in hand - almost cost them when Gareth Steenson's pass was intercepted by Cory Allen in the sixth minute, but the Blues centre could not hold onto the ball.

"We didn't see the Blues in that first half. They were found wanting defensively, they couldn't get the ball or keep it. It was as one-sided an encounter as I have ever seen at this level. Exeter knew the game was won in the second half, their foot came off the pedal, they made changes and lost their rhythm. The Blues couldn't have got any worse and did lift their game. There was more pride in the performance and they got four tries by sticking in there."

Undeterred, the Chiefs launched another multi-phase attack which ended in a try for England international Johnson, one of four capped players in the home line-up compared with the 13 on duty for the Blues.

The flanker was driven over by centre Jason Shoemark from close range and, with next to no possession, the Blues were grateful for Leigh Halfpenny's long-range penalty to make it 5-3.

It proved a momentary aberration though as the one-way traffic continued for the rest of the half.

With fly-half Steenson controlling matters and full-back Phil Dollman a constant threat with his incisive running and support work, Exeter were in total command.

Steenson kicked a penalty before a whirlwind spell of four tries in 14 minutes left the visitors reeling.

First Exeter were allowed to take a line-out unopposed and Australia lock Mumm broke away from the back of a ruck to cruise through a gaping hole for his fourth try of the season.

The Blues were unable to contain the pace and verve of Exeter's attack, and after Dollman's break, right wing Jess exploited a splintered defence and more weak tackling for the third try.

Flanker White, discarded by the Blues two years ago, could scarcely conceal his delight as he dived over with barely a hand laid on him for the fifth.

Steenson's first conversion came back off an upright, but he landed his next four with aplomb as the Chiefs established a 36-3 half-time cushion.

The only downside was seeing try-scorer Johnson limp off, but they barely missed a beat initially.

Steenson's neat dummy and dart saw Whitten cross for the sixth try 12 minutes into the second half.

As Steenson's conversion came back off an upright for a second time, Wales and Lions wing Cuthbert took a frustrated kick at the rebounding ball and proceeded to fall over, neatly encapsulating the Blues' humiliation.

But as Exeter, perhaps inevitably, stepped off the gas, the Blues rallied with two tries in four minutes, scrum-half Williams scampering over and replacement back-rower Copeland bounding through another big hole.

Halfpenny converted both and suddenly there was further cause for optimism as Exeter were reduced to 13 men inside a minute, with Whitten - for a deliberate knock-on - and replacement Sireli Naqelevuki, for a high tackle on Robinson, sent to the sin-bin.

The Blues exploited their numerical advantage as Cuthbert crossed in the right corner and Robinson darted over on the opposite flank.

They created two further chances to increase anxiety in the home ranks but Exeter composed themselves to finish the job.

"In the first half we played with real intent and the attitude that we took on to the pitch following last week was absolutely fantastic - not just to attack the game but also the physicality and strength of the carries.

"Obviously the battle for us is to keep the quality for longer periods. When you go down to 13 men you put yourself under a bit of pressure and we got ourselves down to 13 pretty unnecessarily. That flipped the whole game."

"We didn't do anything that we said we would do inthe first half, particularly for our kicking game, and that gave them too many opportunities to come back at us.

"I think we had to make 100 tackles and we missed 20 and that is not good enough at this level.

"We have to give Exeter credit for the way that they played but we had far more control on the game in the second half. To get four tries was pleasing to give us some momentum going into next week."