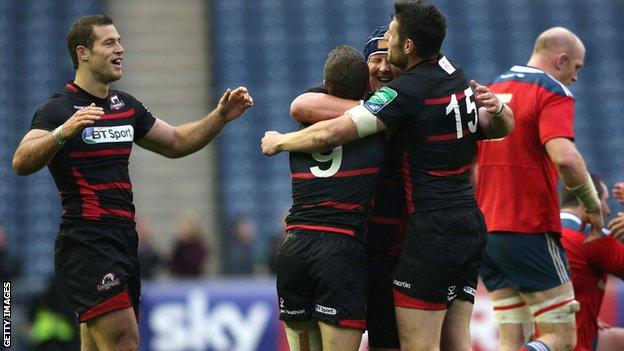 Captain Greig Laidlaw thinks Edinburgh have answered their critics with a 29-23 Heineken Cup victory over Munster.

Edinburgh are bottom of the Pro12 but Laidlaw kicked 19 points to inspire the win against a side who beat them 34-23 in the league last month.

"We've been taking a lot of heat recently from people outside our camp," said the 28-year-old scrum-half.

"People can write what they want about us. I've got a lot of belief in the players and the coaches."

Laidlaw - who passed the 500-point tally for his club during the match - excelled with the boot and in defence at Murrayfield as the hosts produced what he described as a "great performance".

"We played the same game plan as the first five games - we just did it with more accuracy and more control," Laidlaw added.

"It's always important to start well in the Heineken Cup and win your home games. I thought the boys were outstanding."

Edinburgh lost all of their pool matches last season, having reached the semi-finals with a memorable run during the previous campaign.

"That was a great run but this is a totally different team," said Laidlaw. "We'll keep our feet on the ground.

"We want to get back there but it's about refocusing and we have a tough game in Perpignan next week. If we lose that one, we'll be pretty much in a tough position."

Edinburgh head coach Alan Solomons only arrived a month before the season started and has recruited several new faces, including Cornell Du Preez, who enjoyed an impressive home debut.

"It was great for the guys that they got that result," he said. "It was a real boost to their confidence - but what we have been saying is that we need to be performance focused, not result-focused.

"I'm a massive believer that the difference between success and failure is the finest line in the world. If you persevere, you will cross that line.

"We are a determined lot and we are most certainly going to persevere."