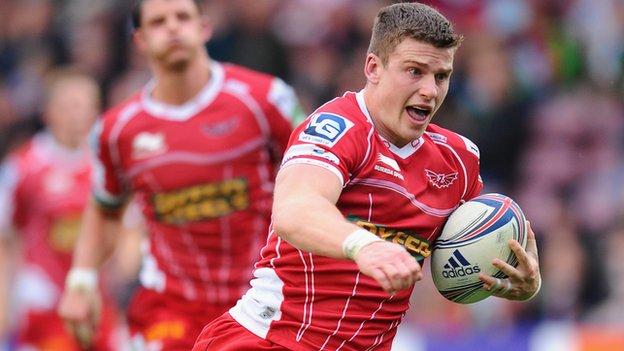 Scott Williams should be the man to replace in next month's autumn Tests, says Scarlets coach Simon Easterby.

Roberts' ankle injury means he cannot play for Racing Metro in the Heineken Cup in Llanelli next Saturday.

But after his try-scoring display in Scarlets' 33-26 victory at Harlequins on Saturday, Easterby says Wales should turn to 23-year-old Williams.

"He has a bit of X-factor and that type of performance in him," said Easterby.

Williams scored a stunning winning try as a replacement in at Twickenham in 2012 that earned his country a Triple Crown on the way to their Grand Slam that season.

But of his 20 caps to date, only five have been starts, with British and Irish Lion Roberts and Williams' Scarlets team-mate Jonathan Davies the established centre partnership for Wales.

All to be played at the Millennium Stadium, Cardiff

However, after another memorable solo try in west London, Easterby believes Williams could move seamlessly into the Wales midfield, alongside Davies and fit-again fly-half Rhys Priestland.

"He [Williams] was outstanding along with many others, but he showed up with and without the ball.

"He showed it a couple of years ago across the road at Twickenham when he ripped the ball from someone's grasp [England lock Courtney Lawes].

"So Scott is a quality player and he's growing into that role and hopefully now there is a window of opportunity with the Welsh team.

"I think he's taken that opportunity with us and hopefully that will catapult him into the national selectors' thinking.

"Playing alongside Jon [Davies] helps and also possibly Rhys inside him as well, which is a great combination for us and would work. It would be seamless for them to transition into the Welsh team in the autumn."

Easterby says the Scarlets' win against Harlequins came as no shock to the players and coaching staff.

"We've prepared, I believe as a coaching group and as a team, similarly every week, but haven't always gone out and been accurate and executed really well," said Easterby.

"I think we did that on the whole. Even in the game in the second half we turned the ball over a bit in really good field positions, but I think we were just accurate and hungry.

"And we've spoken about lifting ourselves for this competition because we've been there before as a club and a region and we wanted to experience that again.

"I think no-one gave us a chance apart from ourselves and we've enjoyed that this week a little bit, coming away first up and we've shown the sort of rugby we can produce and backed that up with some intelligent play and good defence at the end."