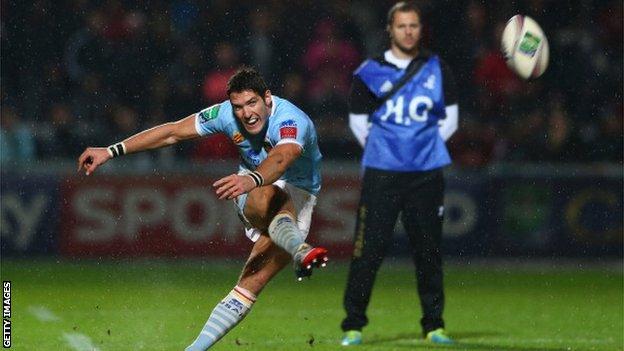 James Hook has said he is not focusing on his chances of a Wales recall for next month's autumn internationals.

The Perpignan utility back has only started one international since 2011.

He converted his own try in the first minute of Saturday's 27-22 Heineken Cup defeat at Gloucester and said: "I want to keep on playing for Wales.

"It is important for me to keep playing well for Perpignan and not think too much about Wales. Hopefully that will take care of itself by playing well."

He added: "If they are going to notice you it is going to be in this competition.

"I think every player in Wales who is there or thereabouts know they are under the microscope especially in the Heineken Cup, so you don't need the coaches to tell you."

Other Welsh players have been linked with moves abroad and Hook told BBC Radio Wales: "It is a personal thing. They have got to look where they are in their careers and how old they are.

"At the age of 22 or 23 I wasn't ready to move to France, but when I came to 26 it was a perfect opportunity to move my family.

"It is an individual thing and they must think about the balance of the team they are going to and if they can get selected for internationals."

Hook, captaining Perpignan, opened the scoring in his side's loss at Kingsholm and he said: "It was nice to get an opportunity so early and I enjoyed playing full-back tonight. I'm obviously happy with my performance but it was so frustrating at the end.

"We were holding on in fairness in the last four, five, 10 minutes but we could have buried the game early in the second half.

"We had an opportunity in the top left-hand corner which probably would have sealed the game."

The French side's other group opponents are Edinburgh and Munster and Hook added: "It is a tough group but it's wide open.

"The two home teams won and there were bonus points picked up by both losing teams and it will go right down to the wire."