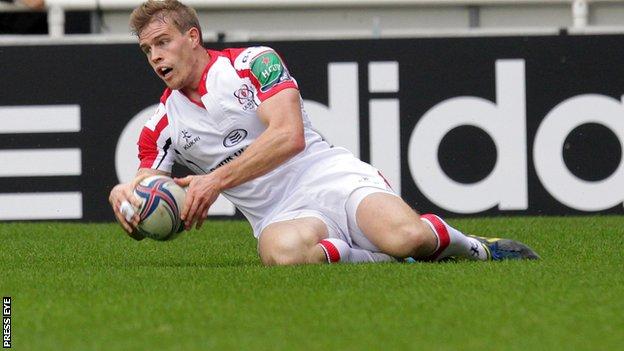 Ulster produced a mature display to earn a priceless away win over Montpellier in the Heineken Cup clash.

Andrew Trimble's 11th-minute try after a flowing backs move helped Ulster lead 7-3 at the break after they had opted to play territory for the most part.

The victory has put Ulster in a very strong position in Pool 5 ahead of their back-to-back contests against Treviso in December.

Both teams went into Saturday's contest after winning their opening contests last weekend and the home side made the better start as a Jonathan Pelissie penalty nudged them into a 3-0 lead.

However, Ulster hit back in emphatic style in the 11th minute as Trimble ran in under the posts to score after exchanging passes with Tommy Bowe after superb initial work by Jared Payne and Darren Cave.

After Jackson added the conversion, Ulster's tactic during the remainder of the first period was to attempt to keep the ball in Montpellier's half as much as possible.

The safety first ploy helped yielded three further scoring opportunities but all were missed with Pienaar hitting the woodwork with a long range effort before slicing another badly wide and Jackson also missing from 40 metres.

However, Ulster's forwards were showing plenty of appetite for the battle against the Top 14 leaders's much-vaunted bigger pack.

Pienaar found his range with a huge effort from just inside his own half five minutes after the restart to extend Ulster's advantage to 10-3.

The introduction of replacement prop Nicolas Mas helped Montpellier hit back with a 49th-minute try as the Ulster scrum briefly creaked with Audrin scoring at the corner flag.

However, crucially, Pelissie missed the difficult conversion and within four minutes the Ulster advantage was back to five as Pienaar kicked between the posts again after former Ravenhill player Timoci Nagusa had been penalised for holding on after being tackled in his own 22.

Ulster missed a chance to score a second try as a charging Tom Court was unable to find the outstanding Rory Best with Francois Trinh-Duc squandered a chance to break after making the interception.

However, Ulster kept their composure as another Pienaar penalty in the 59th minute left more than a converted try between the sides.

Two further Pienaar penalties kept Ulster's scoring ticking along in the final quarter as the home side butchered a couple of try opportunities which could have earned them a bonus point.

With Pienaar off the field, Jackson rounded off his own impressive performance with an injury-time penalty as Ulster celebrated arguably their finest ever away win in the Heineken Cup.