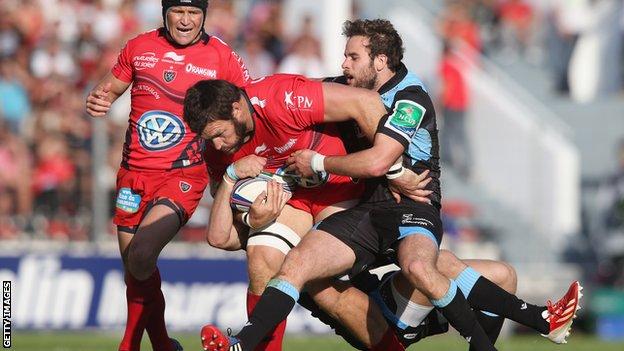 The visitors' recovery after the defending champions raced into a 34-0 lead even had him contemplating a win.

"To get a bonus point was a huge effort from the boys and I'm very proud of them," he said after the group opener.

"With 10 minutes to go, if a few passes had stuck, we could have been close to winning."

Next week is going to be a huge challenge. I've watched Exeter the last couple of days and their last performance against Gloucester was outstanding

Toulon established their lead thanks to two tries from France centre Maxime Mermoz and others from Delon Armitage and Chris Masoe.

But the visitors ran in four tries of their own in 22 minutes to find themselves within 13 points of their opponents with 20 minutes to go before Matt Giteau's second try of the match late on ensured a home win.

"Our goal was to show who we were," said Townsend. "We did that in the second half. It wasn't us in the first.

"And, if you stand off a good team like Toulon, that's what happens to you."

Townsend thought the occasion might have affected his team early on.

"The first half is difficult to explain, the whole excitement got to us as a group, the atmosphere - we forgot to focus on doing our individual tasks," said the former Scotland and Lions back.

"And, if you don't slow down a team like Toulon, they're going to cut you apart. They played some great rugby."

They made a massive impact and scored three of the four tries between them.

"I wouldn't have signed for a bonus point before the game, but I would have at half-time," said Townsend.

"We approach every game with the belief that, if we play our best, we can be a match for anyone. We didn't take a shot at goal in the whole game.

"The guys really performed well, the subs that came on were fantastic. That helped put Toulon under pressure and the tries we scored were cracking tries."

Glasgow next host Exeter Chiefs, who

"Next week is going to be a huge challenge," said Townsend, who will look for his side to avoid another poor start.

"I've watched Exeter the last couple of days and their last performance against Gloucester was outstanding."

"Overall, we're satisfied with the win over Glasgow. It was the first game of the Heineken Cup and we got a win with the bonus point.

"We're obviously a bit disappointed with the second half. We talked at half-time about not letting go and being ruthless, but we did switch off a bit after the break.

"But, credit to Glasgow, they can play some great rugby. We can't forget that they have 80% of the Scotland team."