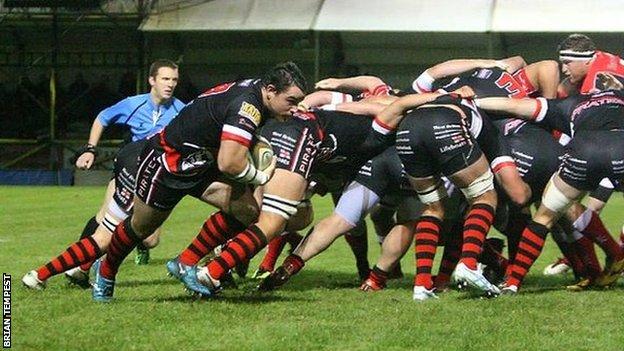 Cornish Pirates assistant coach Harvey Biljon said the team's fine start to the season is reward for the faith they have shown in young talent.

Their 34-17 win over Ulster Ravens in the British & Irish Cup was their fourth in five games this season.

The club decided to pursue a recruitment policy of targeting young players with Cornish connections.

You have to be patient and trust your defence

"They've been given the opportunity and they're taking it and are pushing the senior guys really well.

"Never mind where we've we've signed them from or their age. It's testament to the squad - it's in a good place and they're working hard for each other."

A highlight of their encouraging start to the season has been the impact of the Pirates backline, with several long-range tries demonstrating the potential within the side.

"If you look at our tries and where they're coming from on the field, we're a team that is confident with the ball in hand and that's something we want to encourage," he said.

"The forwards and backs complemented each other and we're really pleased with the result.

"Ulster Ravens came with a strong side; a lot of them have Heineken Cup experience and are senior players so they're a pretty tough outfit.

"We had to be patient. Our defence was outstanding, but we gave up easy points just before half-time. They had some momentum coming in to the second half, but we weathered the storm.

"We were looking to regroup and get our hands on the ball - you have to be patient and trust your defence and then when you do get the ball we are showing that enthusiasm to play when we get the opportunity."