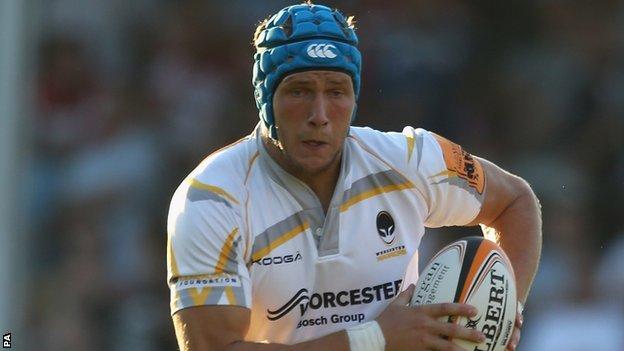 Worcester forward Richard de Carpentier says their under-fire pack put in a display to be proud of to earn a 9-9 Challenge Cup draw at Oyonnax.

On a filthy Saturday evening in eastern France, the struggling Premiership club avoided conceding a try for the first time in 10 months.

But De Carpentier believes keeping out the French side answered their critics.

"Our defence has been criticised a lot in the press. I don't think it's fair. We showed we can defend," he said.

Worcester had not got through a full 80 minutes without having their line breached since the 13-6 home win over London Welsh on 21 December last year.

Richard de Carpentier: Made in Lancashire

But, although failing to end their long run without a win, thanks to the last of the French side's penalties in the final minute, they did at least manage to cope with the wet conditions to avoid defeat for the first time in 11 matches.

"Any away game in France is tough and conditions didn't help," the 23-year-old flanker told BBC Hereford & Worcester.

"It turned into an 80-minute slog with both sets of forwards going at each other.

"They were camped out on our line a lot in the first half, and again in the second.

"They threw everything they had at us and still got nothing out of it."

In only his sixth appearance, De Carpentier's inclusion, along with fellow flanker Cameron Goodhue, produced the sort of performance that coach Dean Ryan was hoping for.

"These are unique environments in terms of growing up," said Ryan. "Chucking it down with rain, with the crowd jumping up and down, it doesn't get any more difficult than that.

"We wanted to expose a couple of them to it and see how the likes of Ben Howard and Dean Hammond went. And Cam Goodhue and Richard de Carpentier were tremendous.

"We also got a full 80 minutes from George Porter and John Andress in the scrum.

"In the first 20 minutes of each half we had to confront the physicality, but it was always going to be a battle, we got a lot from the performance and we were so close to winning."