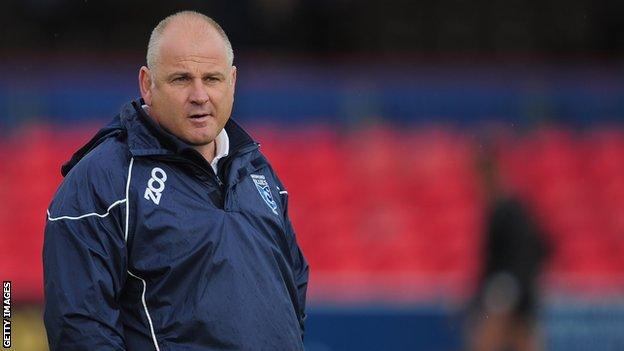 Bedford Blues boss Mike Rayer has said he harbours hopes of the club one day joining the Premiership again.

It is 13 years since the Blues were last in the top flight, having been relegated in 2000.

Rayer, in his testimonial year at Goldington Road, told BBC Look East: "Who knows if we're ever in that position to attack the top flight?

"Because we've got all our ducks in a row, chairman Geoff Irvine may just take that chance."

With the help of financial backing from boxing promoter Frank Warren's Sports Network company, Bedford capitalised on the professional boom in rugby union and won promotion to the Premiership in 1998.

But a year later the club was sold to Jefferson Lloyd International and faced economic meltdown.

A proposed move out of the town was averted when a consortium of Bedford businessman, including Irvine, with the help of the local council, took over and stabilised the team as a part-time outfit in the second tier.

Rayer's men reached the Championship play-off final last season, which they lost to Newcastle, but the question of whether Premiership rugby could feasibly return to Goldington Road was raised.

"It's a huge financial burden we would have to undertake," said Rayer.

"But who knows, there may be somebody else willing to put in a few extra pounds."

Former Cardiff and Wales full-back Rayer's career was celebrated last week with a testimonial dinner for 10 years of playing and coaching at Bedford.

"It's pretty humbling. It's different from a player - I don't think there are many directors of rugby who have done it. Not many last this long," said Rayer, who became director of rugby at Bedford in 2005.

"You leave yourself open to people having a pop at you for concentrating on the testimonial and not the rugby - which isn't the case.

"I've had a few job offers elsewhere in the past but it's got to be about timing. My whole career has been about timing. I wasn't blessed with pace in my playing days."