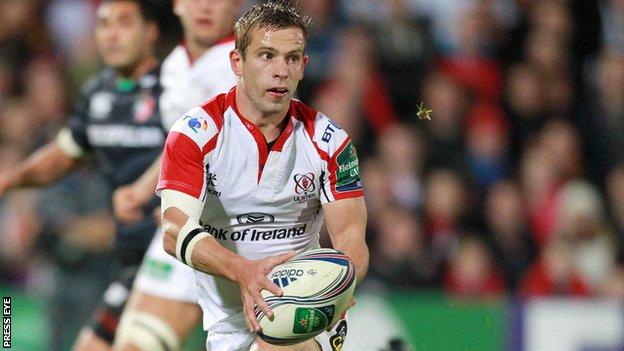 Ulster scrum-half Paul Marshall has signed a three-year extension to his contract which will keep him at Ravenhill until 2017.

The 28-year-old Ireland player made his debut for the province in 2006 and has chalked up 108 appearances for Ulster,

"When I was growing up, all I wanted to do was to play rugby for Ulster. I have been fortunate over the past seven years to do just that," said Marshall.

"I'm passionate about playing for Ulster and I love what it represents."

The Ulster Academy graduate has represented Ireland U21, Ireland A and won his first senior international cap against Italy in last season's Six Nations.

He was selected on Ireland's tour of North America where he played against both the United States and Canada.

"I am extremely pleased to know that I will be representing my province for at least another three years," added Marshall.

"To be able to play in front of friends and family is very special. With the squad that we have at the present time and the redevelopment that is going on at the ground, Ravenhill is an exciting place to be."

David Humphreys, Ulster's Director of Rugby, said he was pleased to have kept Marshall at Ravenhill.

"Paul is an extremely important member of our squad," said the former Ulster fly-half.

"To compete in the knock-out stages of both the Heineken Cup and the Pro12, we need depth in all positions throughout the playing squad and retaining another international scrum-half is an important part of achieving that."