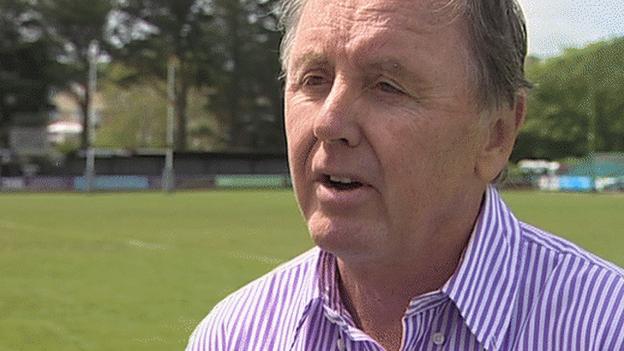 Cornish Pirates owner Dicky Evans has announced plans to step aside at the end of the season, but insists he will continue to help finance the team.

The 67-year-old plans to sell 150 shares in the club and has committed to providing £400,000 in funding on a two-year rolling basis.

The businessman has been involved at the Pirates since 1994.

"We need to alter the ownership of the club in readiness for the next push as I'm not getting younger," said Evans.

In a lengthy statement on the Cornish Pirates website, Evans laid out his vision for the future of the club over the next few years and explained his decision to change the ownership model.

"I have to think of my family for a change, four people who have been incredibly supportive of me," he added.

"I intend to step aside, not down, at the end of the season as the owner of the company and hand over ownership to the many superb friends and supporters who follow the team.

"Consequently, over the next eight months to the end of this current financial year we need to develop a plan to enable friends and supporters of the Cornish Pirates worldwide to take ownership through a basic share issue format.

"They will be taking over a company clear of all loans and debt - paying a nominal £1 for the whole shareholding."

The Pirates have risen up the leagues to the Championship during Evans' time at the club, but have so far found the ultimate prize of a place in the Premiership frustratingly out of reach.

Evans said the need to move to a stadium in a more central location in Cornwall - ideally in Truro - was a key hurdle for the club to clear in order to progress and increase their fanbase.

The pursuit of a larger stadium in Truro has been a long-running issue for the Pirates, who are currently based at Mennaye Field in Penzance in the far south-west of the county.

The club have led a nomadic existence in recent seasons having played at Kenwyn near Truro and at Camborne during the last decade.

"This is the next major step in securing our future," added Evans.

"The stadium will come eventually and it's essential that the Cornish Pirates are in a position to move to the centre of Cornwall and consolidate on the business and spectator support available there, witnessed by the year we spent at Kenwyn - our most successful year at this level financially.

"The rugby will be of the highest calibre possible within the budget constraints that are always with us and the party atmosphere will continue both home and away.

"Cornish people deserve a top-class sporting team and venue - we have the ability to produce the former and as each obstacle to a stadium is surmounted there is no doubt that will come.

"The Pirates are a vital part of this dream - let's not let it go down the tubes."

Evans also plans to offer some "iconic players" and coaches Ian Davies and Harvey Biljon long-term contracts until the end of the 2015-16 season as part of a commitment to working closely with the wider Cornish rugby community.

"Hopefully we can work with the senior Cornish clubs such as Redruth and Launceston to provide our qualified coaches on an almost full-time basis," he said.

"At the same time we can work with these clubs to lend them Pirates squad players.

"And there is no reason why other players with coaching qualifications cannot work with other Cornish clubs at no salary cost to that club.

"We have a deep squad this year and will continue to target all competitions. Once we have decided and agreed which players we think will make the grade we will commence negotiations and we will be cutting our cloth to suit.

"Our budget funds next season should be sufficient to enable us retain a very competitive side."