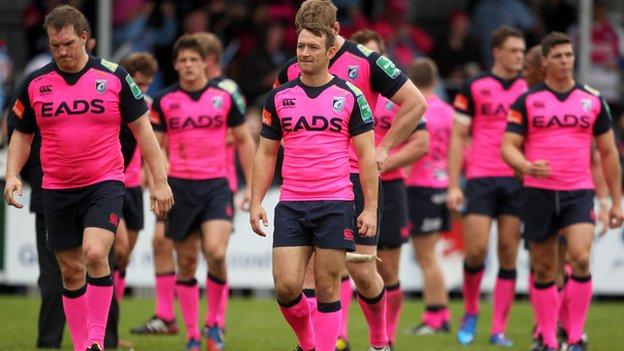 Former Wales centre John Devereux says Cardiff Blues are suffering from a lack of confidence and not playing as a team.

Blues suffered a 44-29 defeat at Exeter Chiefs in their Heineken Cup opener with a poor first half proving costly.

Phil Davies' side showed improvement in the second half but Devereux was concerned with their poor performance.

"There's something not right there. They are playing with no confidence at all," Devereux said.

"Let's face it, they beat a bad Edinburgh side in preparation for the game whereas Exeter beat Gloucester.

"Exeter are a good little side. They're not full of any superstars but they put the effort in and play as a team.

"At the moment I don't think the Blues are playing as a team or playing for each other."

Matters will not get any easier for the Blues, who face reigning champions Toulon at the Arms Park on Saturday.

The French giants made something of a statement at home last weekend by beating unbeaten RaboDirect Pro12 leaders Glasgow 51-28.

On Saturday Exeter ran riot in the first half at Sandy Park, scoring five tries to take a comprehensive 36-3 interval lead.

The Blues mounted a second-half comeback, securing a try-scoring bonus point for their efforts after the Chiefs had two players sent to the sin bin and were forced to play with just 13 players in the final quarter.

Blues director of rugby Davies tried to take the positives out of the defeat.

But Devereux described the Welsh side's first-half display as "embarrassing" and "dreadful" and said they were a side lacking in confidence.

"It was abysmal. Their lack of confidence is evident," Devereux added.

"There were far too many missed tackles. I think they missed more tackles than Exeter actually made in the first half.

"In the second half they came back but let's face it, Exeter went through some bad discipline and had 13 men on the field.

"But the contest was over at half-time and psychologically a lot of teams that go into games like that take their foot of the gas."