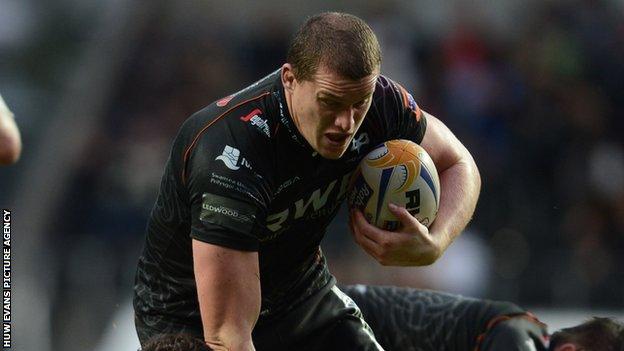 Ospreys will be without lock Ian Evans for their Heineken Cup match at Northampton Saints on Sunday.

The British and Irish Lions star Evans misses out with an Achilles problem, after being dropped for the Ospreys' home defeat to Leinster last weekend.

Wing Ben John also misses out with the groin problem he picked up in the 19-9 loss, so Jeff Hassler replaces him.

Scrum-half Tom Habberfield replaces Tito Tebaldi for the trip to the East Midlands.

Coach Steve Tandy said the Ospreys squad were determined to turn things around after failing to even get a losing bonus point against Leinster.

"It was pretty disappointing to say the least. It was an amazing occasion for us but we felt we let ourselves down," he said.

"We need to get back on the horse and get ready to go Sunday.

"We were bitterly disappointed with our performance and it wasn't the performance we have come to expect from the Ospreys.

"We have to learn from it and we have got an amazing game coming up against Northampton. It's a good week to turn things around."

Although Northampton also lost their opening game 19-13 in Castres, the English side are second in the Aviva Premiership and can field the likes of Wales and Lions wing George North and former Ospreys scrum-half Kahn Fotuali'i.

Ospreys prop Adam Jones is set to be up against his Lions front-row colleague Alex Corbisiero.

"We know it's going to be a tough task going to Northampton but it's something we are excited about doing.

"They are a big physical pack and obviously they have some pretty big backs as well.

"It's going to be a physical contest. We win and lose as a group and we can't wait for Sunday.