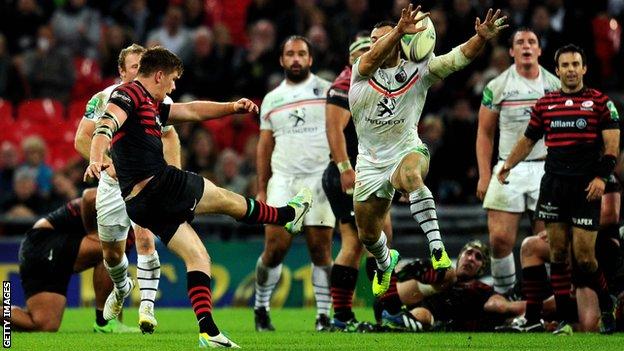 Owen Farrell fell short with a last-gasp drop-goal as Toulouse held on at Wembley to deal Saracens' Heineken Cup hopes a major blow.

The hosts took an early lead through Chris Wyles's converted try but Toulouse were soon level as hooker Christopher Tolofua powered over.

Farrell landed three penalties to make it 16-7 early in the second half.

But Jean-Marc Doussain kicked a penalty and then landed the winning conversion after Louis Picamoles burrowed over.

Saracens could have nicked victory if either Farrell's late penalty or drop-goal deep into injury time - which was partially charged down - had had the legs.

But both dropped short, drawing agonised groans from the vast majority of the 61,428 crowd - a record for a Heineken Cup pool game in Britain - and bringing to an end Saracens' unbeaten start to the season.

In truth the better side won, with Saracens only on top during the period after half-time, and in the end the sheer power and strength-in-depth of four-time champions Toulouse saw them home.

Toulouse are the aristocrats of the European game and they started like millionaires, prepared to chance their arm from anywhere, with number eight Gillian Galan a huge presence in attack.

Unfortunately for the French side Luke McAlister, who missed three first-half penalties, tried to force a pass in midfield and when Sarries countered Wyles exposed Galan in midfield and exchanged passes with England wing Chris Ashton before scooting round under the posts.

Referee Nigel Owens had the final pass from Ashton back to Wyles checked, decided it had gone backwards out of the hands, and Farrell was never going to miss the conversion.

Toulouse were getting well on top in the scrum and should have cut the lead but McAlister - a sublime inside centre once again looking short of the class required to play 10 - missed two kickable penalties.

Saracens had already been warned about a possible yellow card when David Strettle was sin-binned for an early tackle.

With McAlister's boot malfunctioning, the visitors kicked the penalty to touch and then set up a churning maul that drove 20m before 19-year-old Tolofua finished things off with a mighty shove.

Scrum-half Doussain, soon to switch to 10 when McAlister went off injured, took over the kicking duties and things were all-square at 7-7 a quarter of the way through the match.

In Strettle's absence Farrell missed a shot at goal for Sarries but the England fly-half hit the target with two more before the break to make it 13-7 to the hosts.

Saracens had been content to kick deep and try to put pressure on Toulouse with their defence but the Londoners came out with much more attacking intent after the break and produced a series of sustained assaults, with Billy Vunipola and co carrying hard into the guts of the visiting team.

They could not quite open Toulouse up, with Ashton going nearest with a chip and chase to within five metres, but their scrum was getting on top and a Farrell penalty saw them edge into a nine-point lead.

But Toulouse had come to win and with their powerful bench coming into play, they hit Saracens with wave after wave of attack.

Doussain cut the gap with a penalty to reward the relentless French assault and then came the decisive moment of the game.

Galan had been replaced by the equally powerful Picamoles and the France number eight drove from the base of a turning scrum to score.

Doussain landed the conversion but Toulouse were not safe yet as Saracens roused themselves to batter away for the last five minutes.

Farrell fell just short with a penalty from inside his own half but Sarries, inspired by a Kelly Brown charge, created the platform for one last chance.

The noise from the huge crowd was unrelenting as the ball was spun back to Farrell in the pocket but his effort was partially charged down and fell short - taking with it Saracens' hopes.

"It's unbelievably disappointing to lose. We had a couple of chances in injury time - it demonstrated the fight and composure of the team that we were able to do that.

"Owen Farrell was magnificent, unbelievable, the best player on the pitch. He did everything and doesn't shoulder any of the blame - he was brilliant.

"This result puts Toulouse in control of the group to a degree, but we still have a lot to play for."