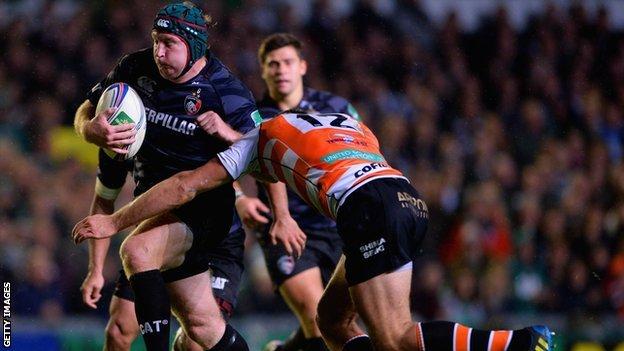 Leicester bounced back from their opening Heineken Cup defeat at Ulster with a bonus-point victory over Benetton Treviso in Pool Five.

The latter's try to secure the bonus point came with the game's last move.

Toby Flood kicked 14 points for Leicester while Tobias Botes kicked a penalty for Treviso, who had three players sin-binned.

Leicester, already without several key players, including both first-choice centres, suffered another blow after just four minutes when Fijian centre Vereniki Goneva went off with a leg injury.

Tigers led 13-0 at half-time as Flood kicked two penalties and also converted when number eight Waldrom went over just before the break.

Botes put Treviso on the scoreboard with a 47th minute penalty but the visitors then shot themselves in the foot as captain Antonio Pavanello and winger Christian Loamanu received yellow cards in the space of two minutes, the former for repeated offences, the latter for a high tackle on Scully.

They paid the price immediately, hooker Tom Youngs forcing his way over following a line-out and drive, and in the 65th minute United States international Scully got Leicester's third try after a quickly taken tap penalty.

Flood converted both scores but with it looking like Leicester would fail to land a crucial bonus point, Thompstone stepped inside a defender to score the fourth try in the final minute, with Flood again adding the extras.

"We made too many errors, again. If we qualify from our pool, we will look back and think we got five points which were important, but it's such an odd environment to take five points and play as poorly as that. We did not deserve it.

"There's no rhythm at the moment, no continuity. We are making too many errors and every time we get any momentum we turn the ball over.

"Credit to the guys for scoring three tries in the second half. They came here to shut up shop and make life difficult for us and we made life harder for ourselves."