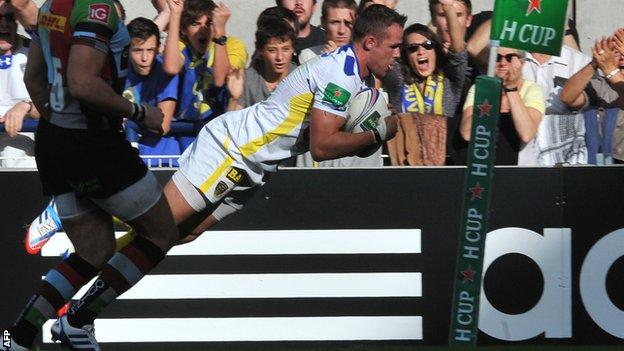 Quick-fire tries from Wesley Fofana and Thierry Lacrampe put Clermont 20-6 up before Tom Williams scored for Quins on the stroke of half-time.

With Quins deep in their own territory it looked more likely that Clermont would score a fourth try to earn a winning bonus point, but Joe Trayfoot led a stunning break-out by the visitors and former All Black fly-half Evans drilled the ball between the sticks to send the Londoners home with some consolation.

The opening 40 minutes saw both sides play some spectacular running rugby, with Clermont's all-star backline relishing the possession secured for them by the rugged home pack.

Quins looked like being out-gunned at times but they kept trying to play and although they never threatened to prevent Clermont extending their unbeaten home run to 65 games, they will be delighted to have stopped the hosts - last year's beaten finalists - adding to their three first-half tries after the break.

Australian fly-half James kicked Clermont into an early lead after a threatening run from Fofana and when another stunning attack stretched Quins backwards and forwards across the width of the pitch, Wales full-back Byrne was left in splendid isolation to score on the left wing.

Fofana beat two men to cross for the second try but two penalties kept Quins in touch before what looked like being a decisive score.

Sivivatu and Byrne combined to shred the visitors' defence and Lacrampe was on hand to take the scoring pass and put the hosts within a try of an attacking bonus point.

James's conversion made it 20-6 but Quins' attacking ambition was rewarded when Mike Brown drew Fofana and the England full-back's one-handed basketball pass sent Williams over in the corner.

Evans converted and against all odds Quins only trailed 20-13 at the break, but despite their best efforts they could not haul Clermont back in after the interval.

The power of the home XV kept them on the front foot but despite several times coming close to a fourth try all they earned for their endeavours was a James penalty.

That at least made the game safe but Harlequins had the last laugh with replacement back-rower Trayfoot's break carving out the chance for Evans to cut the winning margin to seven points with a sweetly struck drop-goal.

"We are disappointed not to have come away with more. You look at the record that they have here and credit to them.

"We gave them three early tries but stayed in it and leave with a point because of a cracking drop-goal by Nick Evans to finish.

"In the Premiership we have started pretty slowly. Hopefully this game has really turned our season around. I'm incredibly proud of all the guys out there."