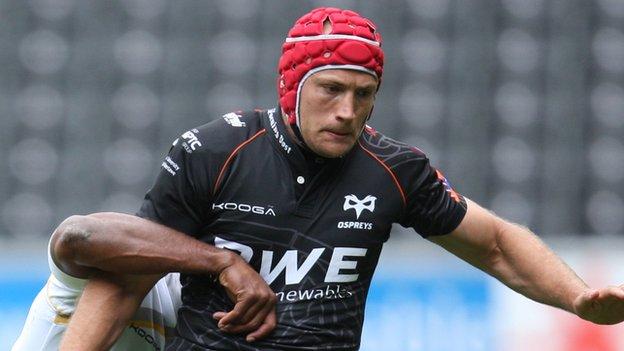 Ospreys are under no illusions that their Heineken Cup clash with Northampton Saints is "do or die".

Full-back Richard Fussell says the region head to Franklin's Gardens with nothing less than a win on their minds.

In Saturday's opening European match, Ospreys went down 19-9 at home to Leinster without a losing bonus point to put them on the back foot in Pool 1.

"It's do or die. We might be underdogs but we have to win up there," said Fussell of Sunday's match.

"We have got to put our best performance out there.

"We had a great week building up to the [Leinster] game, but on the day a couple of silly mistakes gave Leinster a foot into the game.

You can't go up there expecting to lose. you have to go up there in the right frame of mind

"The whole team was frustrated with ourselves and that's one thing we have to put right."

But although the Saints went down 19-13 in Castres in their opening game, they came away with a losing bonus point.

And Fussell knows that Northampton, one of the favourites for the title, have an imposing team including the likes of British and Irish Lions pair George North and Alex Corbisiero.

"It's going to be a tough old day at the office. They are no mugs in the Premiership. They are big, confrontational guys. We don't come across these [English] sides very often.

"They have been tipped to be in the last four at least. It's not going to be an easy challenge going up there so we have got to get our game right.

"You can't go up there expecting to lose. you have to go up there in the right frame of mind.

"We have put ourselves on the back foot, so we have got to focus on us. We are going up there to try and turn them over. A win is a must."

The Ospreys have failed to score a try in their last two outings, and Fussell knows they have to put that right and stop a big Franklin's Gardens crowd from getting behind the home team.

"Northampton have great support. We have to quieten them early, impose ourselves and show we are there to win," added Fussell.

"Hopefully we can show that in the first 10-20 minutes and shut them out of the game."