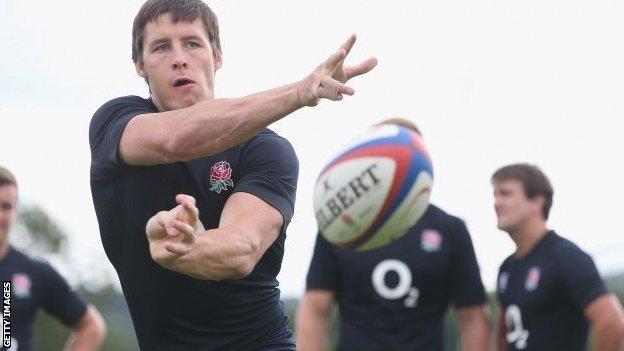 Saracens' Joel Tomkins, Gloucester's Henry Trinder and Northampton's Luther Burrell have been called up along with Exeter flanker Tom Johnson.

Backs Manu Tuilagi and Brad Barritt and forward Tom Croft miss the whole of the series, which begins on 2 November against Australia, through injury.

Prop Alex Corbisiero is included, despite picking up a knee problem.

Lancaster said the 25-year-old faces "a couple of weeks" of rehabilitation but he hasn't ruled the Northampton prop out of the Australia Test.

"He's not out of the series by any stretch of the imagination," said Lancaster. "Everyone is optimistically hoping he will come through and be available for some if not all the games.

"Long term it's obviously something he's struggling with, but we're optimistic that with good management - and his club Northampton have been excellent - we'll see him through beyond 2015.

"We're still quite a way away from the Australia game. We'll give him plenty of time but we'll do what's right for Alex."

England named their elite player squad and second-string Saxons squad in August under the terms of their agreement with the Premiership clubs. Burrell's inclusion as injury cover increases the size of the senior squad to 34.

"We are pleased with the form of the squad," Lancaster added. "Inevitably there have been some injuries and there is still a big European weekend ahead.

"But injures always create opportunities and we are pleased to call up Tom Johnson, Joel Tomkins, Henry Trinder and Luther Burrell into the senior squad.

"Luther joins us as injury cover so it will be great for him to come in and put a marker down in what is going to be a competitive selection leading into the Australia game."

Should the 26-year-old play against Australia, he will do so on the day brother Sam faces the same opposition in rugby league's World Cup.

"Joel has been very effective in some very big games for Saracens," said Lancaster. "He's got the temperament and the game understanding now.

"We're confident in Joel. It's going to be an interesting selection debate over the next few weeks."

Trinder, 24, was not originally named in either the Saxons or elite player squads but his strong start to the season has seen him come into contention.

When asked if he considered the likes of George Ford or Danny Cipriani at fly-half, Lancaster said: "Not really. We've got the three we've got and we think they are the three who deserve to be there on merit in terms of form over the last 6-12 months.

"The message to all the players is you have got to play well over a consistent period of time."

The squad will meet in Leeds next Monday for a training camp before returning to their Surrey training base on 27 October.