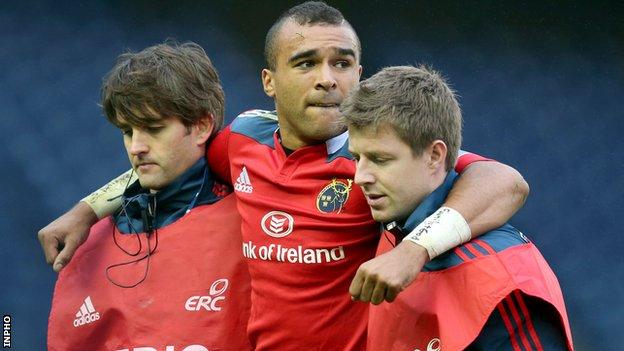 Simon Zebo will miss Ireland's three November internationals after suffering a cracked bone in a foot, which will keep him out of action for 10 weeks.

The 23-year-old Munster wing sustained the injury in Saturday's 29-23 defeat by Edinburgh in the Heineken Cup.

Zebo will wear a protective medical boot for the next four weeks as he begins his recovery.

Ireland start the Aviva Stadium series against Samoa followed by games against Australia and New Zealand.

Zebo was called up as injury cover during the British and Irish Lions' Australia tour earlier this year.

He will also be sidelined for Munster's next three Heineken Cup fixtures, against Gloucester on Saturday, plus December home and away games against Perpignan.

Zebo suffered a foot injury during last season's Six Nations loss at home to England, and missed the remainder of the tournament.