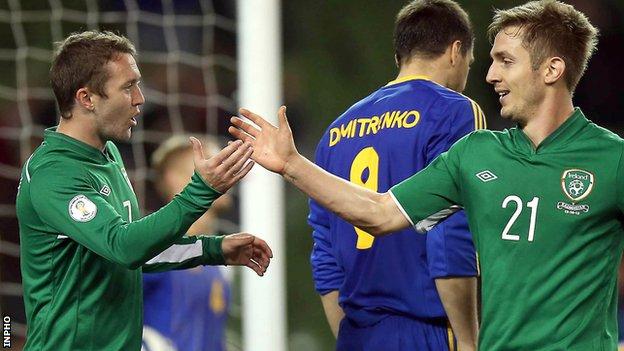 Republic of Ireland interim manager Noel King's annoyance with questioning of his tactics was the big talking point after his side's 3-1 World Cup qualifier win over Kazakhstan.

King became angered when it was suggested that Kevin Doyle and Anthony Stokes had been played out of position.

"Don't talk to me about that will you please," King, 57, said in an interview with Irish broadcaster RTE.

"I don't know what you mean. They are not (being) played out of position."

King's post-match comments came after his second game in charge of the Republic, following Friday's 3-0 defeat by Germany in Cologne.

Robbie Keane, John O'Shea and a Dmitriy Shomko own goal gave the Irish a comfortable World Cup qualifier victory as they finished fourth in Group C.

The Dubliner's interim reign is now expected to end with the Football Association of Ireland hoping to have a successor to Giovanni Trapattoni in place before Christmas.

However if King's brief spell in charge is over, he did not depart quietly as he strongly defended his organisation of the Republic team.

King took particular umbrage when it was pointed out that Doyle and Stokes, who usually operate as strikers with their clubs, had played in wide roles in Tuesday's concluding qualifier.

"Kevin Doyle is not (being) played out of position. If anybody wants to do their homework. He's played there loads of times for his club (Wolves).

"Anthony Stokes has played on the left hand side (for Celtic) umpteen times. So this conversation is incorrect."

King, whose regular role is as Republic Under-21 boss, went on to describe the line of questioning as "typical" and claimed that the efforts of the players were being "degraded".

"I can walk around Dublin with my head held high," he said.

"The players were terrific and we took the game by the scruff of the neck from the start.

"It's fantastic - they gave everything and are a credit to the green shirt."

The Republic fought back to secure the points after a stunning opener from Shomko.

King added: "I was delighted with the response of the players to the goal, they didn't panic.

"We tried to pass and there were times we didn't get it right, but if you are going to progress on a method you have to allow for mistakes.

"The players stuck to their task, particularly defensively."

Speculation will now turn to the next manager, with Martin O'Neill and former Republic boss Mick McCarthy among the apparent contenders.

Sunderland defender O'Shea, who scored his first international goal in 10 years, set out the credentials needed for the job.

"Whoever gets it gets it, and they know they'll have a good group of lads to work from and a team that's hungry to qualify for the next European Championship."