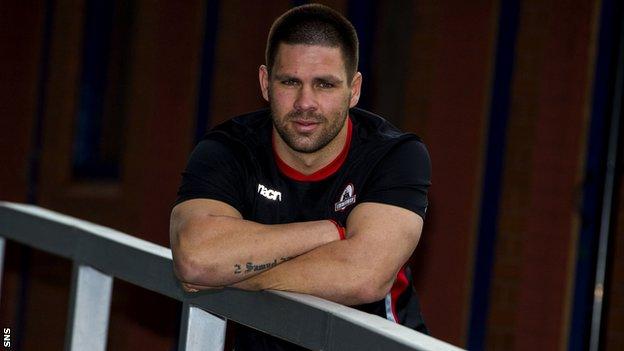 Cornell du Preez and Omar Mouneimne say the target for success with Edinburgh under is to become a mistake-free rugby machine.

Edinburgh opened their Heineken Cup campaign with and travel to face Perpignan on Sunday.

"We need to be a neater team," said assistant coach Mouneimne.

Forward Du Preez added: "The coach is trying to make us play a system where there are no errors and we put pressure on the other team."

Semi-finalists in 2012, Edinburgh exited the tournament at the pool stage last season and currently sit bottom of the Pro12 table having won only once in the league this term.

But the Pool 6 defeat of Munster has boosted confidence ahead of the trip to France.

"I know this is a very tough competition," said Mouneimne, who joined Edinburgh this summer along with Solomons.

"We're going to play Perpignan, who are an incredible team, who are and have everything to prove.

"It will be extremely difficult to go there and just win.

"Perpignan are going to come out like a runaway train. In front of a partisan crowd, they are going to want to deliver."

Mouneimne explained that his fellow South African was trying to change a style of play that led to a disappointing last season for Edinburgh.

"We want to be a team that's accurate every week until it becomes a culture and does become a habit," said Mouneimne.

"In every game we've played, we've actually been in control of the first 30 or 40 minutes and errors have started to creep in and they have been naive at times.

"If you look a year or two down the line, if we could be the ideal side, we'd be a team that's systematic and we want to be brutally physical - that's the key."

Number eight Du Preez, who was recruited this summer after exiting Southern Kings, feels it is important to demonstrate that Edinburgh can maintain their progress in order to increase the fanbase at Murrayfield.

"It is important to show people we're getting there," said the 22-year-old South African. "The last couple of weeks, the guys have been improving every week, so it's not just a one-off thing.

"We don't want to be a team that just makes up the numbers. The systems are in place and we're working at being a team to be reckoned with."

Du Preez recognised that Perpignan would be difficult opponents, with the French Top 14 side looking to recover from their opening 27-22 defeat away to English side Gloucester.

"They have a big pack of forwards and love their mauling," he added. "They are very unpredictable and like to run from their own 22 or play little kicks.

"Edinburgh are good in the attack and show a lot of patience. We've got the potential to be great."