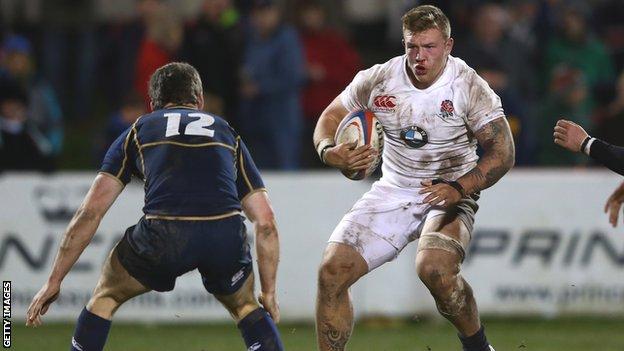 Plymouth Albion have bolstered their front-row options by signing England Under-20s hooker Max Crumpton on loan from Premiership side Saracens.

The 19-year-old, who played for Albion coach James Shanahan at Old Albanians, has won four U20s caps and also played for England at U16s and U18s level.

"This season we have been running on just two hookers and that is always a bit risky," said Shanahan.

"He is a good physical hooker who knows me and he knows my systems."

Crumpton will go straight into the Albion squad for the British & Irish Cup match against Stirling County at the weekend.

"Great to announce that I've joined Plymouth Albion on loan - it's going to be a great season," Crumpton - who earned trials with football clubs West Ham, Charlton and Arsenal - wrote on Twitter.

Shanahan added: "I have been looking for another hooker for a while and when the A League matches finished I contacted Saracens about the availability of Max.

"We will see how the first month goes but I would like the loan to continue until the end of the season."