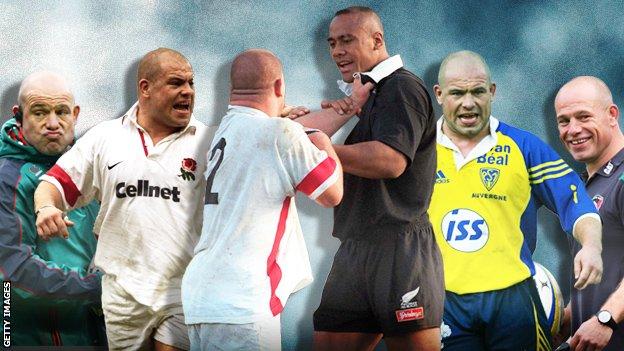 Growling images of the irascible former hooker showcase an impressive playing career with Leicester Tigers and England - with the 1997 Haka confrontation with New Zealand counterpart Norm Hewitt perhaps the most famous.

He chuckles as he seems to briefly ponder the possibility of having to have a word with himself for pushing his luck with Hewitt, allowing his international playing career to hamper his club progress or for letting his loose tongue - and pen - end his England days.

"I am quite a belligerent and driven person," Leicester's director of rugby told BBC Sport. "I was as a player and I can be as a coach."

The coaching version has mellowed slightly and has a more measured view - it had to in order to be able to sustain a trophy-laden spell in charge at Tigers since 2009. But not completely.

Cockerill says any mistakes he made as a player have put him "in a good place".

"I played for England and played here and know what it's about," he said. "I know about the trappings and distractions. I can see that in players and can say 'look mate, I know where you are at'.

"I messed lots of things up in my career. I think that puts you in a good position to manage other people. I played for England and played for Leicester's second team the week after and I know how disappointing that is."

Cockerill is the first to admit there are times when his belligerence has gone too far as a coach.

"Sometimes you behave in irrational ways when you are under pressure," he said.

And the fact he has been discussing disciplinary issues with his squad while he was serving a nine-game ban for some much-publicised naughtiness in last May's Premiership final has clearly not been lost on the 42-year-old.

"I drive discipline very hard," Cockerill said. "If a player behaved like that I would be very upset with him.

"In the last nine weeks I have had to deal with disciplinary issues with players and it is a little bit ironic when I am sat there on a nine-week ban. The rules have to apply for both."

Cockerill, who returns to the dugout for this Sunday's Premiership game against London Wasps, has just signed a new-five year contract at the club he has served for all but two years since 1992.

In his enforced absence, Tigers have "done very well and are in a good spot".

They are third in the Premiership table, and a win and a narrow defeat from their opening two Heineken Cup games is a steady start.

But while there is an obvious willingness to accept his faults, recognise when he has overstepped the mark and hold his hands up for the odd potty-mouthed outburst, he makes no apologies for his passion.

"My frustration comes out at some point," Cockerill said. "I am not angry because I cannot control myself. I choose to be angry to make the point which gets me in trouble.

"If I have done something wrong and have genuinely made an error of judgement I am happy to say 'sorry, my fault, I shouldn't have done that'.

"This last one, should I have done it? Probably not. But were there circumstances around that? Yes there were. And I will stick up for the safety of my players and what I think is right. Whether you think that is right is your choice.

You might dislike me but would I want to employ me? Probably. If you employ me - you have got me. I am on your side. I will do everything to make us good

"Will I change? I will try to change my language but certainly not how I go about what I do."

And what he does and how he goes about it clearly works. Like him or loathe him, there can be little argument that he has been good at his job.

He has been in charge since 2009 following two separate spells as acting head coach and has led Leicester to three Premiership titles, five Premiership finals and a Heineken Cup final.

"I will try to drive the environment as hard as I think I need to drive it and that's the sign of a good person," Cockerill continued. "You might dislike me but would I want to employ me? Probably. If you employ me - you have got me. I am on your side.

"I will do everything to make us good. I am not about protecting my job, I am about being good."

The attitude and much-talked about Tigers culture is something that Cockerill sees as going hand-in-hand with the success.

"I am a Leicester bloke and it's my club because I played for it more than anything," he added. "I understand the amateur and the professional era. I understand how the club thinks and ticks and works and the mentality.

"You can't make excuses for me as a coach. If I say 'we can't win because we have 10 players injured', what are the players going to think? I don't care who's missing - as a player I wouldn't."

Cockerill says the mentality is that they are "ordinary people that are good at rugby and hopefully do special things".

"That sounds a bit corny but that is quite a key element," he added. "Caring about the fact we play for Leicester, we play for the community, we play for all the supporters. Those things are important - we cannot lose that.

"We all live in the community. I want us to play well so that on Sunday morning we can wash the car on the drive and say hello to the neighbours and not be embarrassed."

The ability to keep a sense of perspective is something Cockerill sees as crucial and something he learned very quickly after briefly taking over as interim coach for the first time in 2007.

He was certainly better equipped for his second stint in charge following Heyneke Meyer's resignation in 2009.

"You can drive yourself insane," he explained. "When I first started, I was so worried about what the supporters thought, what the papers were going to write and what the players said.

"But I have worked with some good coaches. Pat Howard was a very good influence on me, in the fact you are never as bad as you think you were because you lost, or as good as you thought because you won.

"It helped me coaching wise, seeing Leicester from the outside. And it was time for me to leave. I wasn't getting picked and my relationship with Dean [Richards] wasn't brilliant. I didn't want to leave with any bitterness or regret. I had a great 10 years, I loved playing here but at the end of my career I made some poor decisions that upset the coaching staff at the time - and rightly so."

"Playing in France [for Clermont Auvergne from 2002-04] was fantastic. It's a great place, a great city, good people and I really enjoyed it. It was a good decision. I would like to have stayed longer but I was past my prime by a long way. It's a good thing to do at the end of your career."

"I meet a lot of coaches who worry about their progression in the game. I am at one of the best clubs in one of the best jobs. I am not a particularly scientific person. I hear about a three-year plan. For me a three-year plan gives you three years of excuses. You look at recruitment and other things, but don't worry about next year, worry about today. There's no science to being a good coach or sportsman, it's just hard work."

"With my relations with union, it's very unlikely at this point! At some point, if an opportunity came up - with any country - you would look at it. But I don't think about it. I don't yearn for that because I have a great job. I don't want anybody coaching this team because it is my team."

Regrets, I've had a few

"You regret some of the behaviours. How I finished with England was a regret, writing a book and getting in trouble. But that's me I think. I never looked for excuses. I did what I did. Clive [Woodward] chucked me out of the England team and probably rightly so but I did not try to deny that."

"Rugby has given me everything. Of course I still enjoy it, but actually what I do pays the bills. It is not like going for a bike ride or taking the kids out. Every minute of every day I am thinking about what I am doing tomorrow rugby-wise."

"In the end you just go 'actually, I know this club better than anybody. I know what I am doing is the right thing'.

"I will get judged on the results, or the recruitment and how we play. I will get the blame for my decisions and that's fine.

"I can't worry about what Joe Bloggs writes or what people say on the internet. When you get past that, it's a lot easier."

His 19-year association with Tigers, and success as both a player and coach has brought many obvious benefits and a deep understanding of the "traditional" approach that serves the club so well.

But it has also brought its own challenges as Cockerill, who was born in Rugby, tries to bridge the gap between successful teams and players.

"What I have had to do is transition one era of players to the next," he said. "And I think I have done that pretty well with Martin Corry and Lewis Moody, Geordan Murphy, Martin Castrogiavanni and Ben Kay - those types of players that come towards the end of their careers.

"Our success has been built on a solid foundation of making the right calls, rather than the sentimental calls.

"Some people retire and some don't want to.

"You have to say 'look it's time for you to go, you are knackered'. They say 'I don't think I am, I have another year in me'. 'Well, I don't think you have'. And a year later when you speak to them you still have that relationship."

His children also help the whole perspective issue - although not always.

Cockerill admits he still struggles to switch off. His two daughters - eight-year-old Anna and Olivia, six - do help keep him grounded.

But maybe taking his "rugby-mad" son Stan, 10, to his local club on a Sunday is not the best form of relaxation.

"When we go on family holidays I can forget about it for a bit, for a couple of weeks," Cockerill said.

"But when I take my son to the local rugby club, I am often not thinking about him playing, I am thinking what I need to do to get ready for Monday - that's how it is. It's what I do."

"In World Cup year when we won one from seven and I came home, he asked me 'do you think they will sack you?'," he said.

"Mate, I don't really want to have this conversation."