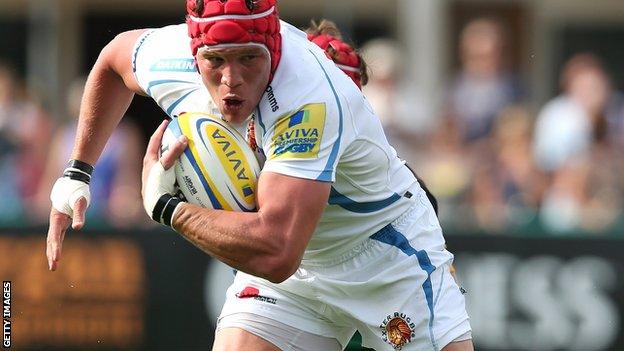 Exeter Chiefs' fine form could see flanker Tom Johnson joined by his team-mates in the England squad, according to head coach Stuart Lancaster.

Johnson, 31, is the club's only player in the squad for the November Tests.

But superb displays like the 44-29 win over Cardiff Blues in the Heineken Cup have caught Lancaster's eye.

"The more they can put in performances like that, the more Exeter players will come in to the equation," he told BBC Radio 5 live.

"Exeter were outstanding at the weekend. There's more than Tom, to be honest - there's others including some of the younger lads who are starting to push through.

"It's great to see Henry Slade getting game time, Sam Hill has been excellent, Jack Nowell will come back from injury and even the likes of Haydn Thomas and Jack Yeandle - they're all good players and are playing well."

Lancaster took Chiefs coach Rob Baxter to Argentina as part of his coaching team during the summer, with several members of his regular set-up in Australia on Lions duty.

England enjoyed a first away series win against the Pumas for 32 years, despite some of their star players being rested or on tour with the Lions.

"I know Rob well now from Argentina - full credit to him and his coaching team for what they've delivered," he added.

Johnson was originally named in the second-string England Saxons squad at the start of the season, with young full-back Nowell the only other Exeter representative in the squad.

An injury to Leicester flanker Tom Croft opened up the space for Johnson's promotion, with the flanker now hoping to add to the five caps he won in 2012.