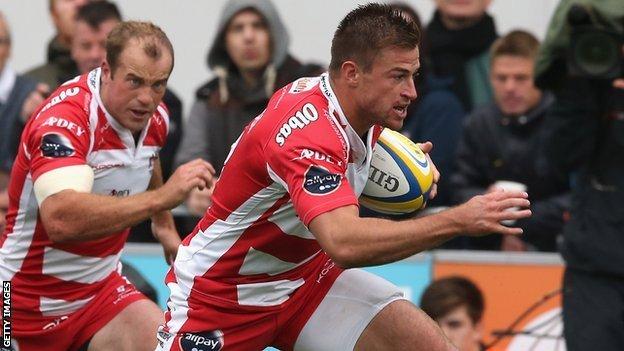 Gloucester's Henry Trinder is ready to live up to the expectations placed on him by head coach Stuart Lancaster following his England call-up.

The 24-year-old is one of three uncapped centres in Lancaster's squad for next month's autumn Tests.

"Stuart rang me and it's always a shock when you see his name pop up on your phone," he told BBC Gloucestershire.

"He told me why I'd been picked and what he wants from me. I'll try and live up to that if I can."

Trinder continued: "He was very pleased with how I've been playing and how I carried myself on the pitch. He thinks aggression has been added to my game.

"I'm pleased to be in the mix and I'm looking forward to the internationals."

Swindon-born Trinder came through Gloucester's academy system and, after a dual registration deal at Moseley, became a first-team regular in 2010.

During that season, he played under Lancaster in the England Saxons squad at Churchill Cup and went on to train with the Six Nations squad last year, but missed out on selection because of an ankle injury.

And he admits he was surprised to be included this time around.

"I wasn't expecting to skip the Saxons," added Trinder. "But Gloucester have given me a great platform to express myself on the pitch and that's what I've tried to do this season.

"The first few games of the season have gone my way and I'm feeling confident in how I'm playing here. If I can keep up this standard then hopefully I'll be OK."

Gloucester finished fifth in the Premiership last season but have had mixed results so far this term - losing three of their five league games.

And Trinder is relieved his England chances have not been scuppered by their indifferent start.

"You see the players who are being selected regularly and they are in those top teams," he added.

"It does worry you a bit but the way we finished last season, finishing fifth, and we know we can be up there. It's just about us turning it around as a group.

"It does play on your mind a bit but all I can think about is my own performance and thankfully it has been noticed."