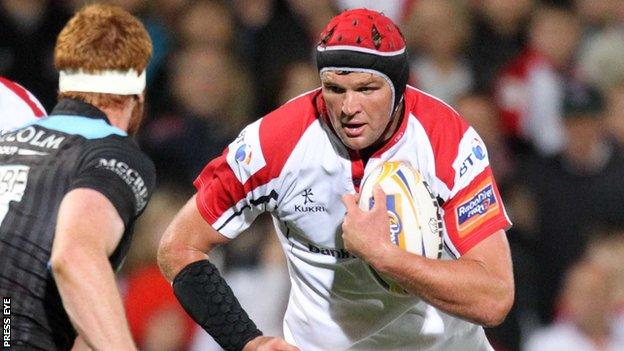 Johann Muller believes Ulster's forwards are capable of overcoming the "massive physical challenge" that will be posed by Montpellier's pack in Saturday's Heineken Cup clash.

Muller is fully aware that the bigger Montpellier forwards could have as much as a 7kg advantage per man in the game in France.

"We don't want to shy away from taking them on physically," said Muller.

Muller believes the experience gained by Ulster in recent seasons will stand the pack in good stead in Saturday's contest.

"We've got a good pack with a lot of internationals. We'll be a little lighter but we do our basics quite well and we're definitely not going to shy away from the physical aspect."

While thrilled with the pack's work in the loose and at the breakdown in last weekend's opening 22-16 win over Leicester, Muller believes that there was room for improvement with the team's set-piece.

"We gave away three or four penalties at scrum time and lost two or three line-outs which wasn't good," he said.

"It takes a lot more out of your legs than it did in the past.

"Before, if you got a really good hit, the scrum was the easiest thing in the world because the ball was already won.

"But now you are in there for 10 or 15 seconds where you lock and load it and every now and then you come out and the legs feel like jelly and they don't really want to run."

Muller is likely to be up against his South African World Cup-winning team-mate from 2007 - Montpellier centre Wynand Olivier - while the home team's list of French stars should include fly-half Francois Trinh-Duc.