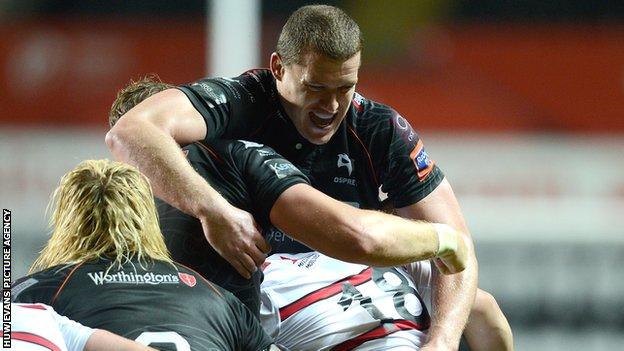 Ospreys lock Ian Evans would consider leaving the Welsh region if they were not competing in the Heineken Cup.

The British and Irish Lions and Wales international, 29, is in the final year of his contract with Ospreys.

English and French clubs plan to quit the Heineken Cup for a new tournament, which may include Pro12 teams.

"If that competition wasn't to go ahead I think it would be a massive sway to the way your future is going to pan out," he said.

"You need that intensity. I think the Heineken Cup is just below international rugby and you need play that week in week out if you've got any international aspirations.

"There's no room for error really and it's pushing you as a person."

Evans was in the unfamiliar position of being dropped for the Heineken Cup opener against Leinster, which ended in a 19-9 home defeat, and is a doubt to face Northampton this Sunday because of injury.

But the 6ft 8in forward said if he was not being selected for big games then that could also have a bearing on his future.

"Last week I more or less wasn't selected and obviously that was very disappointing," Evans said.

"It's probably been the worst week that I've been involved in rugby for a long, long time and I was really disappointed not to be involved.

"This week I've got a niggling Achilles injury and I'm just trying to make sure that's right.

"It is a massive shock [not to get selected], not that I take away anything from the competition - I think James King [who faced Leinster at lock] has been playing extremely well."

Ospreys have lost a number of high-profile players to France in recent years, including Wales stars Mike Phillips, Lee Byrne and James Hook.

The Welsh region's chief executive, Andrew Hore, admitted in August that the region could find it hard to keep hold of some of their Lions stars.

Lions and Wales tight-head prop Adam Jones has started negotiations with the region over a new deal but admitted he would consider a move to France.

The contract of Evans' fellow lock Alun Wyn Jones also expires at the end of the 2013-14 season.

Evans added: "The Heineken Cup's the biggest games, that's what you build into and if you're not involved in them then what else are you meant to do, with one year left on your contract?

"I haven't had any offers as such yet, but I suppose things will start coming my way hopefully sooner or later.

"[Going abroad] would not appeal to me, but first and foremost my wife is about to give birth at the end of November and I'm quite a family-orientated person, but I want to play competitive rugby."

Meanwhile, defeat by Leinster left Ospreys with an uphill struggle in this weekend's second-round match at Northampton.

"To lose your home game has put us under a lot of pressure really, but there's one thing for sure, I think the boys react under pressure," Evans said.

"Northampton lost out in Castres and playing in front of their home crowd and with the team they've got, I think it'll be a great competition to see who is going to come out on top."