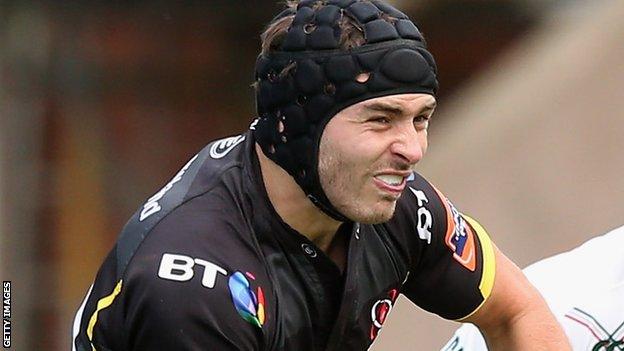 Two late penalty-tries were not enough to complete a Jersey comeback as Ulster Ravens held on to win 24-19 at Ravenhill.

Jersey led after Alex Rae's touchdown but a superb solo try from David McIlwaine helped the Ravens to an 11-5 half-time advantage.

Chris Taylor crashed over to put Ulster in control but Jersey rallied and trailed by just 2 points late on.

Despite defeat, the losing bonus-point briefly sent the Channel Islanders top of Pool Six of the British and Irish Cup, until Cornish Pirates thumped Ayr on Saturday.

In persistent Belfast rain both sides had struggled to threaten in the early stages but Jersey skipper Rae broke the deadlock on 15 minutes after pressure from the pack near the line.

A McKinney penalty closed the gap before full-back McIlwaine picked up the ball in his own half and waltzed through numerous missed tackles to score.

The start to the second period was forgettable but the game came to life when Taylor's converted try opened up a commanding 21-5 lead.

But the Jersey forwards, who had dominated the encounter, forced the Ravens into conceding two penalty-tries with the maul collapsing as it approached the try line on both occasions.

With Ulster centre Rickie Andrew in the sin bin and momentum in Jersey's favour it looked like they might go on to complete a dramatic comeback, but McKinney held his nerve with a late penalty to get the Ravens' cup campaign back on track.