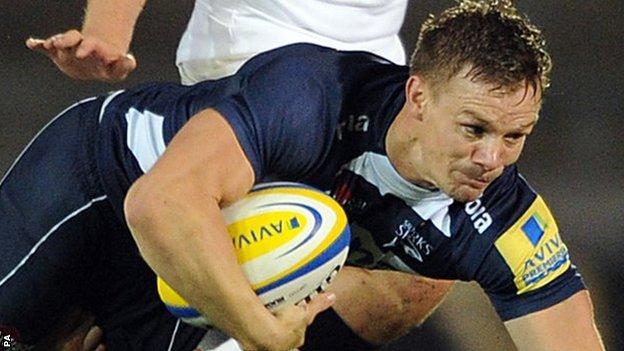 Worcester's winless run was extended to 12 matches as Sale eased to a Challenge Cup victory at Sixways.

The Sharks scored three times before the break through Rob Miller, Dwayne Peel and a penalty try to earn a comfortable 24-3 lead at the interval.

The Warriors finally got a foothold after the break, crossing twice in 10 minutes through Alex Grove and Mike Williams' effort from a rolling maul.

But Sale's fourth try from Mark Easter made the game safe for a bonus point.

Sale fly-half Danny Cipriani kicked a penalty and three conversions for a nine-point haul with the boot, while opposite number Paul Warwick kicked the second of his two conversion attempts, to add to his first-half penalty.

Worcester, by contrast, have work to do, having only briefly threatened to build on last weekend's 9-9 draw with Oyonnax.

The second-half introduction of Agustin Creevy in the front row helped the Warriors compete up front, but his fellow Argentine Mariano Galarza had an unhappy home debut, with a first-half sinbinning.

Worcester return to Challenge Cup action in December, with a home tie against Biarritz, before the return game in the South of France a week later.

In Saturday's other Pool One game, Biarritz beat Oyonnax 26-6, to move second in the group.

Worcester, a week on from having victory cruelly denied with a late penalty in eastern France, and Oyonnax bring up the rear, with two points each.

"We were slow out of the blocks, which is a concern and I'm not going to pretend that the second-half improvement has cheered me up at all.

"It's easy when the game's gone to behave in a way that demonstrates some emotion. But it's more difficult to demonstrate that from the beginning. And we're not getting that right.

"When you're getting beat in the scrum and in the drive and in the line-out and you're playing in the wrong area of the field, it's no surprise when you're 24-3 down.

"Everyone's got a responsibility. There's no point just talking about it. We've got to demonstrate just how much we care and how hard we're working."