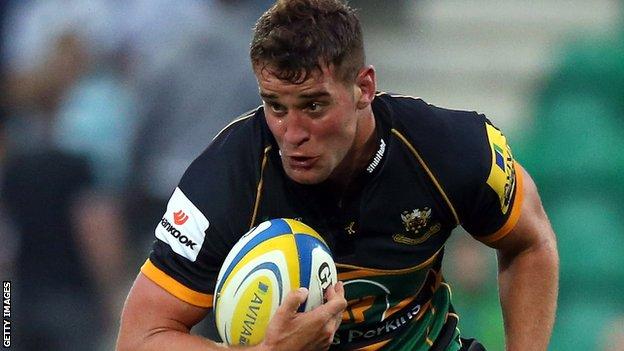 Northampton Saints forward Calum Clark admits he has to improve if he wants to get back into the England squad.

The 24-year-old was not one of seven Saints players to be included in Stuart Lancaster's squad for the autumn internationals.

Clark told BBC Radio Northampton: "I don't think I'm playing well enough to be involved - it's not a surprise.

"I've got to improve as a player but it's a lot of motivation for me personally."

Clark was ruled out of England's 2012 summer tour of South Africa and the subsequent autumn internationals due to suspension, and then suffered shoulder and ankle injuries to rule him out of the Six Nations and the three-match tour of South America.

The former Leeds Carnegie player says the Saints' rotation system is not a factor in him being overlooked.

"It is tough and it is unusual because you don't necessarily get the run of games week, in week out," he said.

"But it's something you've got to get used to. It's something a lot of teams are doing and it'll hopefully have an effect later in the season with our freshness."

After the Heineken Cup tie defeat to Castres, Saints host Ospreys on Sunday, and Clark says they need to tighten up their discipline after eight yellow cards in six Premiership and European matches.

"We didn't really impose ourselves in the way we wanted to against Castres," he said.

"But they are French champions, so we're not too disheartened by it being a tight affair.

"A lot of the yellow cards have been quite borderline calls but we've just got to be patient with our defence and trust that we don't have to chase that little bit too hard."

With Clark set to stay with Nothampton when their England internationals leave for matches against Australia, Argentina and New Zealand, he says they are in a better position than ever to cope.

But both Saints and England could be without Alex Corbisiero, who picked up a knee injury against Castres and could be ruled out for a month.

"Alex Waller has been back-up for a number of years and he's grown and matured," added Clark.

"He fits in pretty seamlessly. It's huge shame for Corbs to be sitting out but no-one works harder than him on his recovery.

"We haven't always done so well in these periods in the past. It's something we've worked on - to make sure everyone in the wider squad could come in at any time. I think we're in a better place with the younger lads playing outstanding rugby in the 'A' league.

"You're excited to see them come in rather than anxious to see if they'll step up."