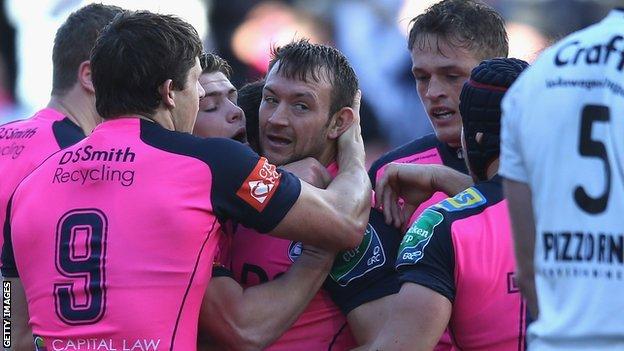 Wilkinson kicked three more penalties after the break with Halfpenny twice responding for the hosts.

But Davies broke free from a tackle to score two minutes from the end and Halfpenny converted.

Having conceded five first-half tries in defeat at Exeter Chiefs in their opening game, director of rugby Phil Davies had demanded a telling response from his players.

The hosts earned a bonus point for their four-tries second-half effort at Exeter and Davies hoped they would maintain that momentum against the wealthy French club.

But few could have expected the Blues to give Phil Davies such a memorable 50th birthday present as they toppled the star-studded French Top 14 team.

The Blues also had to contend with a late change when skipper and hooker Matthew Rees was ruled out by illness and Wales and Lions wing Alex Cuthbert failing to come out for the second period after suffering a leg injury.

Marc Breeze came into the starting line-up while ex-Toulon prop Gethin Jenkins took over the captaincy.

The visitors found the Blues' defence as impenetrable as it had been porous at Sandy Park in the opening round.

McIntosh - known affectionately as The Chief - was at Sardis Road to end 24 years of playing and coaching as they took on London Welsh in the British and Irish Cup.

But he will have been heartened to learn of the Blues' defensive effort, particularly in the dying moments as Toulon tried and failed to hit back.

as their title defence opened and their early, attack-minded approach seemed to indicate they were confident of a similar effort in the Welsh capital.

But the Blues that followed their defeat at Exeter to regain respect in Europe in conditions that began in drizzle, continued in a deluge and ended in autumn sunshine.

The hosts' pack may not have matched their much-vaunted opponents at the scrum and Toulon's physical superiority was often evident at the breakdowns.

But the Blues' line-out was solid and while fly-half Patchell occasionally lost concentration, his tactical kicking was impressive.

A fourth-minute long-range Patchell penalty began the duel in which Wilkinson's penalty brace took his side ahead.

Halfpenny levelled after lock Bakkies Botha's forearm challenge on Josh Navidi at a ruck and the teams were tied 6-6 at the break.

Former England and Lions fly-half Wilkinson kicked his side ahead with a fifth shot from a narrow angle with eight minutes remaining.

But after Cory Allen's break took the Blues deep into Toulon's 22, Sam Warburton maintained the momentum with his own surge.

Davies, who had replaced Patchell as Wilkinson kicked his final penalty, went on an arcing run and after not being held in a tackle by Toulon's desperate defence, bounced off the synthetic surface to score.

Halfpenny added the conversion and Toulon's frantic efforts to hit back were thwarted.