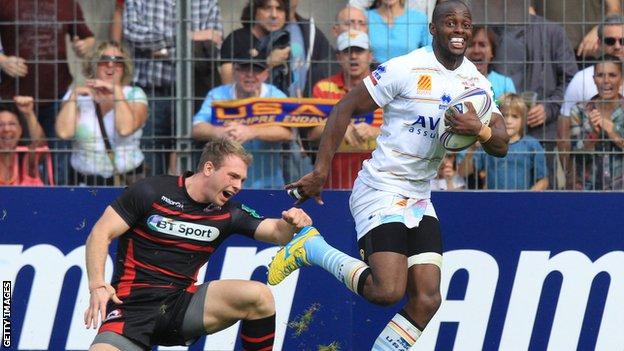 Tim Visser's converted try helped the visitors into a deserved 7-3 lead at the interval.

But they were undone by two tries early in the second half as Joffrey Michel and Wandile Mjekevu crossed.

And, with Gloucester losing at Munster on Saturday, all four teams in Pool 6 have one win after two rounds of fixtures.

Greig Laidlaw missed an early kick and Perpignan moved into the lead when James Hook's penalty from the left was ruled to have gone over before travelling off to the right of the far post.

The television match official was called upon again after Edinburgh centre Joaquin Dominguez attempted to touch down.

The Argentine's foot appeared to have been in touch when he went over and the visitors' score remained unchanged.

However, Alan Solomons' side were frustrating their hosts and their patient approach paid off when Jack Cuthbert, Nick de Luca and Dominguez combined to release Visser for the opening try. Laidlaw converted.

The introduction of Mjekevu in place of Richard Haughton at the start of the second half gave Perpignan the fresh impetus they were looking for and the winger started the sweeping move that ended with Michel going over.

And Mjekevu touched down himself moments later as the French side took control. Hook added to his earlier conversion.

Edinburgh continued to come under pressure and Purll plunged over before Watisoni Votu's craft set up another try for Mjekevu, Hook adding the extras on both occasions.

With Solomons' men trailing by 24 points, the prospect of a losing bonus point always seemed unlikely.

But the visitors showed spirit in the closing stages and were rewarded when du Preez forced his way across the line and set up a straightforward conversion for Laidlaw.