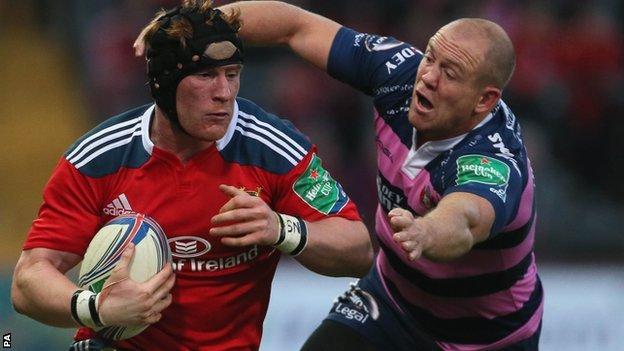 Gloucester put up a brave fight for an hour before two-time champions Munster finally pulled clear in the Heineken Cup Pool Six encounter at Thomond Park.

Munster stretched away again through Damien Varley's converted try, but a Jonny Bentley penalty kept Gloucester in touch at the break.

Keatley added a fourth penalty before Johne Murphy's late try for the hosts.

The two sides have history at Thomond Park, with Munster's 33-6 win in the "Miracle Match" of 2003 one of the greatest pool games in the history of the competition.

Saturday's game did not have quite as much at stake as that group decider, which saw Munster sneak into the quarter-finals final at Gloucester's expense with a last-minute try.

But the famous Limerick ground was again packed with 26,500 fans and the two sides combined to serve up another treat.

Gloucester went into the game with 12 changes from the side which beat Perpignan on the opening weekend of the tournament and it looked as though they were in for a painful evening when Keatley stroked over three penalties to give Munster a 9-0 lead.

The hosts then came close to shredding Gloucester out wide but a spilled pass gave Dan Robson the chance to kick downfield and give the visitors their first attacking position.

They won the resulting line-out and scrum-half Robson sniped down the blind-side to send Sharples over in the corner with Bentley, who had missed an earlier penalty attempt, making amends with a fine conversion.

The game was played at a tremendous pace, with both sides determined to chance their arm, and when Munster assembled a surging multi-phase attack Gloucester only managed to keep them at bay by conceding a penalty.

Munster went into the corner, won the line-out and drove, and Limerick-born hooker Varley was at the heart of a churning maul to score.

Keatley hit the target from out wide with the conversion, and it looked as though Munster were on their way, but a silly penalty just before the break enabled Bentley to make it 16-10 at half-time

Munster remained well on top after the interval but they could not turn their control of territory and possession into points, with Keatley spurning one chance to stretch the advantage as he pushed a penalty wide.

Gloucester's lively backs looked dangerous on the rare occasions they got the ball in hand, but Keith Earls' jinking run carried Munster deep into the visitors' 22 and when the hosts forced a penalty at the resulting scrum, fly-half Keatley scored the first points of the half with 15 minutes remaining.

With a nine-point advantage the hosts could finally relax and they wrapped up victory when Keatley picked out Murphy with a pin-point cross-kick before adding the conversion as Munster went top of the Pool Six table.

"I am obviously bitterly disappointed about the result. We probably weren't accurate enough when we had opportunities, we have to look at ourselves first and foremost there.

"In terms of the effort and the commitment the team showed, it was fantastic. I am very, very proud of the group of players that took the field today."

Davies on the 12 changes from last weekend:

"I was comfortable all along that it was the right thing to do - we had a very physical encounter against Perpignan a week ago.

"We probably would not have made as many changes but for some being forced on us. The players who played tonight were able to prepare physically and mentally for this big, big match. To me they performed to a large degree."