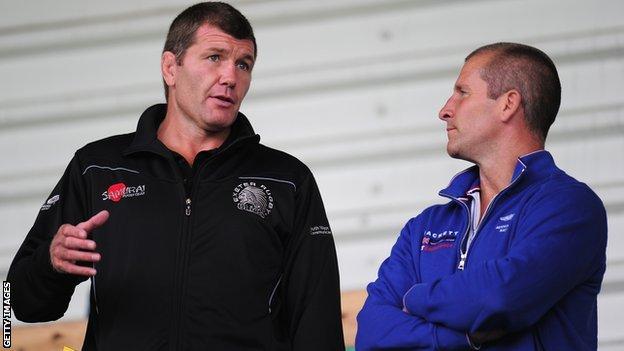 Flanker Tom Johnson was promoted to England's squad for the November Tests.

But head coach Stuart Lancaster said several other Exeter players were also coming in to the selection reckoning.

They've performed well as a trio and they complement each other

"It's great to see that people are talking about more than just Tom as having genuine England ambitions," Baxter told BBC Radio Devon.

"That's what we need to do: create that excitement and feeling among the squad that playing well on a regular basis will make these things happen.

"We've talked about it at length. I can't tell you how many times I've told the players that if they show some consistency and move us up the league table then they will start to get the rewards and recognition for that. The key is to keep doing it week-in, week-out.

"Credit to Tom and the performances he's put in so far this season, but great credit to the team as well. It is by big team performances that guys start to get more credit and recognition."

Johnson was originally named in the second-string England Saxons squad at the start of the season, with young full-back Nowell the only other Exeter representative in the squad.

But Lancaster told BBC Radio 5 live that several of Exeter's young players were also on his radar after the club's impressive start to the season.

Johnson, who already has five England caps under his belt, has been part of a highly effective back-row unit at Sandy Park this season.

The 31-year-old has played alongside Australian flanker Ben White and number eight Dave Ewers - who Johnson describes as "a beast" - in several of Exeter's strongest displays.

"Ben has done it in a quiet way but offers a huge amount of energy, Tom has been carrying well and adds lots of pace and then there's the brute strength of Dave coming through.

"They've performed well as a trio and they complement each other.

"We've also got guys in behind in James Scaysbrook and Kai Horstmann who are chomping at the bit.

"It's a great position to be in. We've got a strong squad which means they've got to perform."

Meanwhile, Hepher said that Nowell and fellow back Luke Arscott could target next week's Premiership game against Worcester to return to action.

"They should be available for the Worcester game but they'll have to train exceptionally well to push the guys who are playing out of the team," he said.

"They're coming back and there's LV Cup games coming up and a thick league programme. They'll certainly apply some pressure and it will be good to have them back in and around the squad."