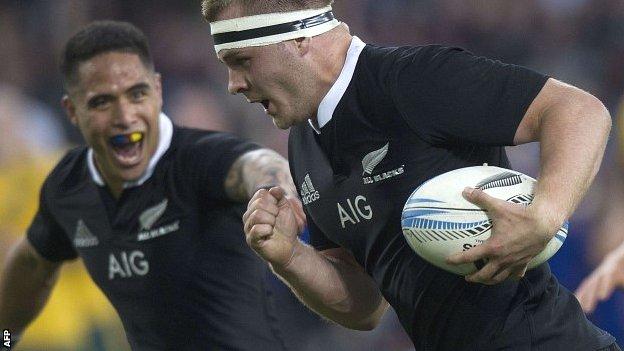 New Zealand maintained their 100% record in 2013 as they beat Australia to seal a 3-0 Bledisloe Cup whitewash.

The All Blacks had already beaten the Wallabies twice to retain the trophy for an 11th straight year en route to winning the Rugby Championship title.

Tries from Adam Ashley-Cooper and Matt Toomua and Quade Cooper's kicking kept Australia in it but it wasn't enough.

Having closed to 33-26 down, the Wallabies' hopes ended when Kieran Read - leading the All Blacks in the absence of Richie McCaw, nursing a knee injury - finished off an overlap for the All Blacks's fourth try.

A penalty from replacement Beauden Barrett made it 41-26 in Dunedin before Tevita Kuridrani barged over late on for the visitors's third try.

Having clinched the Rugby Championship two weeks ago with a victory over South Africa in Johannesburg, this was New Zealand's 10th win from 10 Tests this year.

It also equalled their previous longest unbeaten run on home soil of 30 matches, set between 2003 and 2008. New Zealand's last home defeat came four years ago, against South Africa in September 2009.

"It wasn't perfect but we really didn't expect it to be from where we've been and what we've done in the last three weeks," said head coach Steve Hansen.

"Maybe we let a couple of soft ones in but at the end of the day it's a lot better than last year," Hansen added, referring to the 18-18 draw with Australia last October that followed New Zealand's 100% Rugby Championship campaign in 2012.

That was the only occasion Australia have avoided defeat against their trans-Tasman rivals in their last seven contests since the start of the 2011 World Cup.

The Wallabies enjoyed an advantage in possession and territory in the first half, but were undermined by the ease with which New Zealand exploited half chances.

"We are bitterly disappointed," said Australia captain James Horwill. "We came here to win. We never like to lose but we're proud of the effort the guys put in.

"We were always trying to win the game no matter what the scoreboard was and we went down swinging."

Australia move on to face England at Twickenham in a fortnight, the first of five Tests - including against all the home nations - on consecutive Saturdays through November.

New Zealand travel to face Japan on 2 November on their way to Europe, where they play Tests against France, England and Ireland next month.